Anti-war group to protest as US ambassador attends event 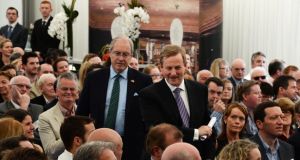 US ambassador to Ireland Kevin O’Malley (standing, centre left) with Taoiseach Enda Kenny at an economic conference at the US ambassador’s residence in recent days. Photograph: Cyril Byrne/The Irish Times

Peace campaigners are planning to picket a business event attended by the US ambassador to Ireland on Monday.

Kevin O’Malley is guest of honour at the Galway Chamber’s business lunch in the Hotel Meyrick in the city’s Eyre Square.

In a statement, the Galway Alliance Against War (GAAW) said it would be staging the protest against what it claimed were the “warmongering policies of Washington”.

Niall Farrell of GAAW said: “We are holding this peace event in solidarity with the millions of people whose lives have been lost or devastated due to the warmongering policies of Washington over the past 14 years.

“Recent research has shown that 1.3 million have been killed in Iraq, Afghanistan and Pakistan due to Washington’s war on terror.

“And the present refugee crisis that has seen civilians perish in the Mediterranean stems directly from US militarism in Libya and the Middle East.”

The protesters will also be pledging support for Independent TDs Clare Daly and Mick Wallace, who are being prosecuted for entering a restricted zone to inspect a US military aircraft at Shannon Airport last year, he said.