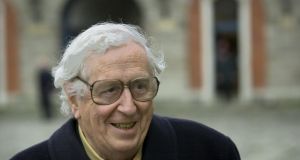 Government departments were at odds over which agency should be responsible for overseeing new anti-sex discrimination legislation being drafted in 1986, the report of an interdepartmental committee to the taoiseach revealed.

The State had obligations to introduce such legislation following its accession to the United Nations Convention on the Elimination of All Forms of Discrimination Against Women.

The Department of Industry and Commerce was “very firmly of the view” that the agency to be assigned functions under the new equality law should not be the director of consumer affairs.

The Department of Labour, however, said that assigning the new powers to the Employment Equality Agency would result in a deflection from its important role in the employment area.

A progress report from the inter-departmental committee set up to examine the anti-sex discrimination legislation was presented to the government by taoiseach Garret FitzGerald on April 17th.

The taoiseach said that despite areas of disagreement between the government departments, the committee reported “the reluctant agreement of the Department of Labour to the new powers envisaged for an agency being assigned to a re-structured Employment Equality Agency”.

Dr FitzGerald asked the government to agree that the Women’s Affairs section of his department should draft the legislation in question.