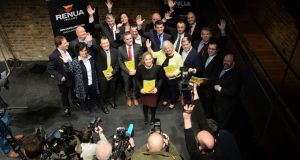 Setting yourself up as a watchdog in government can be a dangerous business, but Lucinda Creighton needed a new message to force her Renua Ireland party into the general election debate.

Since its launch this time last year, under its initial name of Reboot Ireland, the party has struggled to gain ground, as mid-term disillusion with the Government gave way to increasing support for Fine Gael, in particular.

Creighton’s party perhaps came a year too late and has been trying to play catch up ever since.

In an effort to gain some sort of initiative in the lead up to the general election, Renua was first out with its manifesto, which included the flat tax and other distinctly right of centre policies, yesterday.

However, what was most noticeable was Creighton’s pitch for government, made in a situation where only two parties – Fine Gael and Labour - are seriously offering themselves for office.

The Dublin South East TD said Renua will be a “watchdog” for small businesses and entrepreneurs, who she claimed have been “thrown under a bus” by this Coalition.

With Labour asking to be the watchdog on Fine Gael’s left and now Renua offering to whisper into Enda Kenny’s right ear, it is not clear if the senior government party would plump for Creighton over Michael Lowry and other Independents who would do a deal and stick to it, should the Fine Gael-Labour Coalition fall short. “I’d say Enda will look at all other options first,” said one Minister. “Renua would be hard to deal with and then they might have a fit of conscience over something or other.”

Creighton, who will be doing extremely well to return with five seats in the Dáil, should also heed the lesson of other parties who set themselves up as watchdogs, such as Labour and the Progressive Democrats. They are inevitably blamed by the electorate for the ills of whatever coalition they joined.