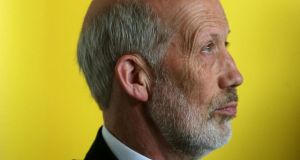 (NCA) investigation into Project Eagle will have to be complete before her party considers involvement in any inquiry.

into the being established by the Irish Government.

“I believe there are many people within the DUP who are very concerned about the Spotlight programme and the revelations that took place within that programme,” he said. “And of course the revelations were directly related to people who were very closely associated with people in the DUP. Anybody that has any contribution to make to these inquiries should make themselves available.”

Speaking in Derry, Ms Foster said the NCA must be allowed to complete its investigation before the DUP makes any decision.

What is Project Eagle?

Nama, the State’s bad bank, took over property loans made by Irish banks in the North with a book value of more than €6 billion. In April 2014, it sold the lot of them in a single transaction, covering 860 properties, to Cerberus, a US company, for about €1.6 billion. The codename for the sale, within Nama, was Project Eagle.

A number of inquiries were ordered after allegations of irregularities in the process. The inquiries include those by the C&AG, the State’s spending watchdog, the Northern Ireland Assembly and the UK’s National Crime Agency. The C&AG believes Project Eagle left the State with a probably loss of €220 million. Nama disagrees with this.

“I don’t think we should jump the gun in any of this. I can understand from other parties that they want to make party politics out of this matter. This is too serious an issue for that,” she said. “I want to get to the truth and have transparency in relation to this matter.”

“Sinn Féin has raised the issue of Nama at least 34 times in the Dáil. I have spoken to the Taoiseach directly on this issue. I spoke three or four times to the Fianna Fáil leader on this, I actually wrote to the Fianna Fáil leader on the issue and he didn’t even bother to answer me. They voted against a commission of investigation,” Mr Adams said.

Meanwhile, SDLP leader Colum Eastwood has called for a joint investigation comprising An Garda Siochána, the PSNI, and the NCA.

He said it was time for “action and certainty on getting to the truth around Nama” and that “it simply does not fly that any inquiry must wait for the NCA investigation”.

The Alliance Party leader David Ford has requested a meeting with other Stormont leaders to discuss the possibility of an independent investigation into alleged corruption surrounding Nama’s Project Eagle transaction.

David Ford said as each day passed and every new allegation emerged regarding the controversial £1.3 billion property deal, “the public’s trust in the political system takes another blow”.

An Alliance source said any investigation must be cross-Border, as the allegations emerging “don’t stop at the Border”.

1 ‘Summer is not lost’ - Taoiseach announces accelerated easing of coronavirus restrictions
2 California police fatally shoot 22-year-old man on knees with hands up
3 Coronavirus: People to be allowed to travel anywhere in their county from Monday
4 Donald Trump is in trouble, and that could spell very bad news
5 Trump under fire from US military after troops threat
Real news has value SUBSCRIBE