All is changed, changed utterly

Analysis: Britain and Ireland are delighted with the successful State visit 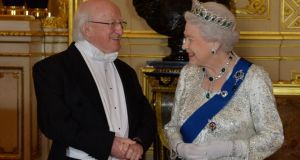 History, good and bad, has happened inside the walls of the Houses of Parliament in Westminster for centuries and then, sometimes, it comes back as scenes in a film.

Last Tuesday, the Palace of Westminster saw yet another page in history when Michael D Higgins made the first of a series of speeches during the week. The question, perhaps, is whether film-makers, or storytellers, in decades to come will look at Higgins’s words when they tell the history of British-Irish relations in the 21st century.

In the days since, there has been a kaleidoscope of memories: the Windsor procession; or the Guildhall’s performance of Amhrán na bhFiann , sweet, light, ethereal, so unlike anything usually heard.

Equally, there was British prime minister David Cameron’s momentary emotion – even discounting the coldness that lies at the heart of politics, as he welcomed Higgins to Number 10.

Or, perhaps, the sight of former Conservative prime minister John Major, who sat in the VIP presidential box in the Royal Albert Hall, minus the man who was his partner in the Downing Street Declaration, the now ailing Albert Reynolds.

The degree of the warmth of the official welcome has been noticed and appreciated, too, by the Irish side.


Cordiality benchmark
So where do British-Irish relations stand now? Disaster and success are usually exaggerated. Undoubtedly, however, the Higgins visit has set a new benchmark in cordiality, which will seep elsewhere. Too many Irish, perhaps, will mistakenly believe the people of Britain thought about Michael D Higgins and nothing else during the course of this week. They did not, of course.

If politically interested, they paid more attention to British culture secretary Maria Miller’s resignation over expenses or the rise of the UK Independence Party in the polls.

If not, they may have had more interest in Manchester United’s defeat by Bayern Munich, or Chelsea’s triumph over Paris St-Germain in the Champions League.

Even if one, or indeed both, are correct, it still does not diminish the value of the seeds that have been sown by the President, but also by those who have welcomed him, during five days in April.

In the Albert Hall late on Thursday, a choir put together by the London-Irish Centre in Camden gave full-throated backing to The Parting Glass .


Celebration of belonging
Too often, the Irish in Britain have been denigrated by the Irish at home as “plastic Paddies”, even if their Irish identity has been central to their sense of themselves. That sense of belonging, but also of pride, was evident in the Albert Hall.

It was not ever thus: the days of “no dogs, no blacks, no Irish” are still within the memory of those living, or the days of cheap jibes, Paddywhackery and condescension that lasted longer.

Once again, Queen Elizabeth displayed judgment and understanding by acknowledging the sins of the past, without seeking to deny they had ever happened, or that they were the result of Irish paranoia.

“Over the years, many Irish migrants to Britain encountered discrimination and a lack of appreciation. Happily, those days are now behind us,” she told the 200 guests gathered in Windsor Castle on Tuesday. “It is widely recognised that Britain is a better place because of the Irish people who live here.”

Neither Higgins, nor any of his predecessors, would have reached Windsor were it not for Northern Ireland progress – a journey helped by one of the guests present, Sinn Féin’s Martin McGuinness.

On Thursday, he spent time chatting with the queen at a reception she hosted for those involved in Northern Irish life – an unusual public event for her on the third day of a state visit. McGuinness – in the eyes of most, many or some – carries his own responsibilities for some of the sins committed during the decades of the Troubles, but the future will be the final arbiter.

For now, the week’s only regret – if there is one – is that the memory many British will have, if they have one at all, will be that McGuinness went to Windsor, not the man who beat him to the Áras.


Overjoyed at result
The Irish in Ireland, or the vast majority at any rate, are delighted at the way the week has gone. So, too, if not even more so, are the Irish in Britain. The British authorities, fearful that they would not have matched the 2011 welcome given to the queen in Ireland, are quietly – with typical British reserve – congratulating themselves.

The British had wanted the visit to work flawlessly. “Let’s put it this way, the palace made it clear that this worked, no ifs, buts or maybes,” one British source told The Irish Times. “It was politely expressed, but there was no mistaking the demand.”

Does it matter that McGuinness’s image has dominated British coverage? Yes, a bit, since British-Irish relations are wider than just the North. But it was probably inevitable.

Contributing to Thursday night’s Albert Hall celebration, broadcaster Olivia O’Leary said the week had “officially given us permission to like the British”.

Many Irish never needed such permission but, equally, some in Ireland have never been that keen on second- or third-generation Irish in Britain. Remember the “plastic Paddies” jibes?

Returning home last night,Higgins left with the applause of some of those Irish who have made their homes in Coventry ringing in his ears. Deservedly so, too.