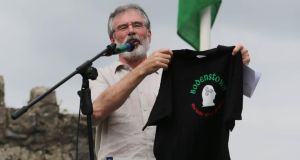 Sinn Féin leader Gerry Adams has described the 1916 Proclamation as unfinished business and said his party will continue to seek “a New Republic with equality and social justice at its core”.

Speaking at the annual Wolfe Tone Commemoration at Bodenstown Cemetery in Co Kildare, Mr Adams told around 1,500 supporters that Jim Larkin attended the same commemoration event a hundred years ago.

“This was in the wake of the Great Lockout and Larkin was cheered by the crowds, showing the solidarity between republicans and the labour movement,” he said.

Today’s trade union leaders need to think about “whether they have a loyalty to their own membership and to working people or to the Labour Party”.

Sinn Féin will not follow Labour’s example of going into office “to give cover to the agenda of conservative parties, repeating again the failed political history of this State over the past eighty years”, he added.

The democratic revolution promised by the Fine Gael-Labour coalition has turned out to be an act of subversion, Mr Adams said, accusing Government parties of trying to control the banking inquiry by “stuffing it with Government TDs and Senators”.

He also said it’s not good enough to blame Irish society for what has emerged in recent revelations about mother and baby homes, and that it’s too simplistic to suggest that because everyone is to blame, no one is at fault.

The “unprecedented scale” of alliances between Fianna Fáil and Fine Gael to exclude Sinn Féin’s 264 councillors from local council positions is wrong and it will not succeed, he said.

“People want us to do the right thing,” he said. “They’re looking to us to provide leadership, to provide hope for the future and that’s a big responsibility.”

The 1916 Rising commemorations belong to the progressive people of Ireland, not to any political party, including Sinn Féin, he said.

But he insisted his party “won’t take lectures on 1916 from those revisionists and other slibhini who abandoned its ideals decades ago”.

He accused the British government of actively undermining the political process through its unilateral decision to end the Weston Park agreement, and by failing to establish an inquiry into Pat Finucane’s murder.

He said this has encouraged some Unionists to reverse progress made since 1998 and “this cannot be allowed”.

He called on Irish and British governments to make clear that they will support the Haass propositions which provide “a very clear way forward”.

However, he said conflicts within political unionism mean there’s no evidence the DUP is willing to approach a recently agreed commitment to intensive talks in a positive or constructive way.

Because unionism has failed to face down rejectionists within unionism as Sinn Féin has dealt with anti-agreement elements on the fringes of republicanism, the UUP and DUP are being challenged by those on the extreme right, such as the TUV and UKIP.

He said Sinn Féin will stretch out the hand of friendship to unionist neighbours but will stand against bigots, racists and sectarian fundamentalists and their cheerleaders who “are on the wrong side of history”.

“They may delay change, but they cannot stop change,” he said.