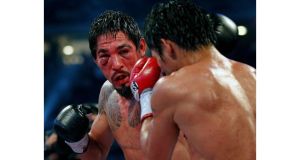 Boxing:Manny Pacquiao cemented his place in the pantheon of boxing greats by recording an unanimous points victory over Antonio Margarito last night to claim the vacant WBC super welterweight title.

The 31-year-old southpaw dominated all 12 rounds against his bigger Mexican opponent at Cowboys Stadium to land an eighth world title in an unprecedented eighth weight class.

Having already established himself as one of the best offensive fighters of all time, Pacquiao outclassed Margarito with his lightning hand speed and precise power punching to improve his career record to 52-3-2 with 38 knockouts.

"It was a really hard fight, the hardest fight in my boxing career," Pacquiao said after winning his 13th consecutive bout since losing to Erik Morales in Las Vegas in March 2005.

"He's strong. I never expected him to be as strong as he was. He's a very tough fighter. I can't believe he took all those punches."

The Filipino, a heavily odds-on favorite going into the fight, pummelled the Mexican's head virtually at will for much of the bout, leaving his opponent with a puffed left eye and a cut under a badly swollen right eye.

Despite being outweighed by 17 pounds, Pacquiao blended raw power with speed in front of a crowd of 41,734 to deliver a spectacular performance against an opponent who was also four-and-a-half inches taller.

The pride of the Philippines, who had never previously fought above welterweight, dominated the official ringside statistics, landing 474 power punches compared to Margarito's 229.

At one point during the 11th round, Pacquiao looked across at referee Laurence Cole and asked him to stop the fight.

"I feel for my opponent, his eyes and his bloody face," said the Filipino, who was hurt by Margarito's body shots during the middle rounds when pinned against the ropes. "I wanted the ref to look at that. In the 12th round I wasn't looking for a knockout. I take it easy because my trainer told me to take it easy and just be careful."

Three whales wash up on Donegal beach 12:18
Two arrested after €130,000 cocaine and cannabis seizure in Co Mayo 12:12
Ireland v France in doubt due to hotel quarantine policy 11:47
France bans short domestic flights on routes that can be done by train 11:33
Government to add US and four EU countries to quarantine list 08:31