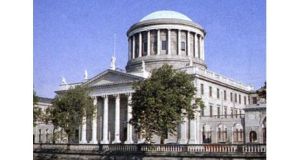 Nama has lost its appeal against the ruling of the Commissioner for Environmental Information.

The High Court has today dismissed an appeal by the National Asset Management Agency (Nama) against a ruling by the Commissioner for Environmental Information that it is a public authority and therefore subject to information requests.

Nama appealed that decision to the High Court, and had argued that the commissioner's decision was wrong. It argued that its establishment under statute does not mean it is a public authority.

In his judgment today Mr Justice Colm Mac Eochaidh upheld the commissioner's decision, and said he agreed with her ruling that Nama constituted a public authority. In light of his findings the judge further dismissed Nama's application to remit the matter back to the commissioner.

Nama refused to supply the information and argued its refusal was justified on grounds including it is not a public authority within the meaning of the 2007 regulations.

The matter was referred to the Environmental Information Commissioner who found the agency was not justified in its refusal and annulled it. Ms O'Reilly said Nama is a public authority on grounds it was a board or other body established by or under statute.

Public authorities had been defined under the 2007 regulations as entities including government or bodies involved in public administration such as county councils and individuals, or their agents, performing public administrative and or legal functions or services in relation to the environment.

Nama claimed in its appeal the commissioner erred in her conclusion on grounds including she failed to apply proper principles of statutory interpretation when considering what is a public authority under the 2007 Regulations.

The commissioner's lawyers argued that the decision was "absolutely correct" and should not be disturbed.

In his ruling, Mr Justice Mac Eochaidh said that the Commissioner's interpretation of the 2007 regulations was correct.