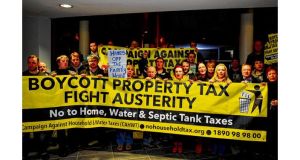 Socialist Party MEP Paul Murphy was among six people arrested last night as members of the Campaign Against the Household and Water Taxes disrupted council meetings in Dublin, Galway and Kilkenny.

Mr Murphy was among five people arrested in Tallaght as about 30 members of the campaign occupied the chamber of South Dublin County Council. The council meeting had to be suspended while gardaí were called. The people arrested were released without charge shortly before 7 pm.

In Swords, Co Dublin, more than 20 campaigners staged a sit-down protest in the foyer of the Fingal County Council building, forcing an adjournment of the the council meeting in an adjoining chamber.

About 20 protesters staged a sit-down protest in the rotunda of Dublin City Hall for about an hour from 5.30 pm yesterday. Gardaí were called when the demonstrators hung a large banner over the front of the building. No arrests were made and the protesters left peacefully at about 6.30 pm.

In Galway a planned protest at the City Hall was stopped by gardaí and one arrest was made under the Public Order Act.

In Kilkenny about 10 protesters staged an occupation which forced an adjournment of the borough council meeting.

The protests come after a meeting of Cork City Council had to be abandoned on January 29th when its chamber was occupied by anti-property tax protesters.

Socialist Party councillor in Fingal and spokeswoman for the campaign Ruth Coppinger, who had been in the chamber, left to speak to the protesters.

She said last night there would be further civil disobedience over coming months. “The campaign has been warning that there would be more effective protests like this. The politicians are refusing to listen. They have refused to come to meetings organised by the campaign so it seems we have to bring our voices to them.”

In Inchicore, Dublin, about 35 people staged a protest outside the constituency office of Catherine Byrne TD (Fine Gael) last night.

Ms Byrne’s daughter, Cllr Clare Byrne, said gardaí were on hand and there was no repeat of the occupation of the office by protesters last week when 10 people entered it during an evening clinic and staged a loud protest with a mega-phone until gardaí arrived.

The TD had said she would have to close the office following the occupation on February 4th. “We talked her out of that as a family,” said Clare Byrne. “She has to have an office here, and the constituents need to know it will be here.”