McIlroy rues one 'that got away' 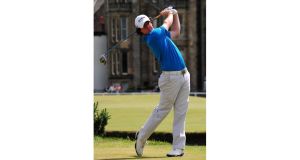 Northern Ireland's Rory McIlroy tees off from the second tee during the final round of British Open at St Andrews, Scotland. - (Photograph: Rui Vieira/PA)

Golf – British Open:Rory McIlroy may have hauled himself up into a tie for third place with a closing 68 but the 21-year-old will reflect on the 150th anniversary British Open at the Home of Golf as the major that “definitely got away”.

On reflection it has been a truly remarkable week for the world number nine, who was unquestionably one of the most popular players who strode around the hallowed turf of the Old Course at St Andrews.

His week began with the course record nine under par 63 - the lowest first round in British Open history - and gave supporters a genuine feeling this was McIlroy’s time for major success.

The notion was short-lived, however, as he was immediately brought back down to earth with a shattering second round 80 in horrendous conditions on Friday. Play was abandoned for a time such was the severity of the wind with balls moving on the greens.

With the disappointment put to bed the Holywood professional settled into the weekend and made great strides back up the leaderboard with rounds of 69, 68 to finish a highly respectable tied third on eight under 280.

“I couldn’t stop thinking about Friday walking up the last hole. This is definitely one I let get away from me,” reflected McIlroy after his round.

“Apart from that round I played really well this week, didn’t do a lot wrong. I just didn’t deal with the conditions very well on Friday. Yeah, that was definitely the most disappointing thing about the week.

“Definitely a case of what might have been,” added McIlroy, who has still never shot in 70s in 13 competitive rounds played over the Old Course (12 in the 60s and that one round of 80).

“You can never really tell what you’re going to do but looking back I wasn’t ready to handle the conditions on Friday. But I came out Saturday and Sunday and my wind play was a lot better and hit a lot of good shots.

“I’m happy the way I finished the weekend but it will always be one I let get away. The support I’ve had here all week has been fantastic; it gives you a lift and momentum during the week.”

McIlroy made the boldest move of the later starters on the final day. His round contained five birdies in all and just the one dropped shot at the 11th. His closing birdie at the 18th might well have been an eagle as he drove the ball into 12 feet but missed on the low side.

Earlier US Open champion Graeme McDowell had a real mixed bag before eventually signing for a 70 to finish on three under 285.

The 30-year-old raced out of the blocks and got to five under by the time he reached the turn, courtesy of four birdies and just one dropped shot.

A fifth birdie came at the 10th after a superb approach to within two feet. And despite a dropped shot at the 12th he holed a monster 80 foot putt at 13 to get back to five under.

McDowell’s round came unstuck with a bogey at 16 before an uncharacteristic four putt at the Road Hole 17th for double bogey.

A birdie from four feet at the last left a better taste as he ended the week inside the top 25.

Colm Moriarty enjoyed a fine week as he closed out with a two under 70 to finish on one under 287. The Athlone golfer was joined by McIlroy's former Irish amateur team-mate Shane Lowry after his closing 75.

The Irish Open champion had been moving along nicely but dropped shots with a double-bogey at the 17th.

Darren Clarke signed for a 71 to get back to level par 288 by week's end and ensure all five Irish players who made it into the weekend finished on par or better.

Tiger Woods may have switched back to his trusty putter that served him so well in winning 13 of his 14 majors, but it wasn't enough to mount a final day challenge.

The world number one eventually carded a closing 72 to end the week alongside McDowell on three under.

"I didn't win," was his curt response to what he thought of his week. "It was one of those weeks where I couldn't put it all together."

"I felt I played well enough to get into the top 10 but simply couldn't keep any momentum. The strange thing is I drove better than ever this week but it was one of the worst putting performances I've ever had."

Early birdies came at the first and third with holed putts from seven and five feet respectively. However Woods gave back the shots with untimely double-bogey sixes at the fourth and seventh. Three birdies and another bogey at 13 meant he slipped under the radar and away from the main spotlight.