Maxi to the rescue for Liverpool 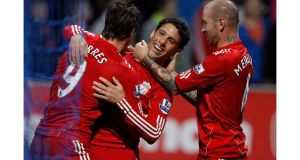 The Argentinian latched onto a brilliant Fernando Torres backheel to settle a competitive encounter at the Reebok Stadium four minutes from time.

Both sides created numerous chances in an evenly-matched contest but Liverpool left satisfied knowing their near month-long stay in the bottom three was over.

The win drew them level on points with Bolton, who had been enjoying their best start for four years and were looking set for a seventh draw of the campaign. They might even have won it themselves had a late Kevin Davies glancing header fallen the right side of the post.

Hodgson named the same Liverpool team for the third successive Premier League game as he attempted to instil the cohesion they have been lacking.

It initially appeared to work as the Reds, hoping to build on last week’s morale-boosting win over Blackburn, started confidently and created two early chances for Torres. The first came after three minutes as Steven Gerrard swung in a corner but Torres could not keep his header on target.

His next chance came just five minutes later but, despite netting last week’s winner, the Spaniard still showed signs of the rustiness that has hampered him all season.

Torres raced through on goal from a Gerrard pass but delayed a shot and then mis-kicked as he attempted to stab past Jussi Jaaskelainen from close range.

Bolton’s first attempt on goal came when Stuart Holden blasted a free-kick at the wall from 25 yards. After that Bolton gave as good as they got and Jose Reina parried a vicious Holden volley from distance after the US international was teed up by Davies.

The hosts appealed for a penalty as Lee Chung-yong cut inside from the left and went down under a challenge from Jamie Carragher but referee Martin Atkinson played on to few complaints.

Liverpool attacked back but Cole scooped a long-range effort well over the bar and Gerrard did likewise from a free-kick. Fabrice Muamba shot from long range for Bolton but his effort curved well away from goal. Torres set up Gerrard but the Reds skipper drove wide from the edge of the box.

Taylor tested Reina with two free-kicks just before the break but the Spaniard managed to smother both attempts and Carragher survived another penalty appeal after the faintest of touches with the hand.

Krygiakos, goalscorer in two of the previous three league games, forced Jaaskelainen to save from a Gerrard cross in injury time.

Bolton made the early running in the second half and twice forced Liverpool to clear unconvincingly without creating a clear-cut chance.

Gerrard tried to raise Liverpool’s fading tempo with a powerful run and long ball for Torres, but a promising attack was ended as Muamba collided with Lucas. Gerrard found good space on the edge of the box but his shot was deflected into the air and claimed easily by Jaaskelainen.

Liverpool suffered a blow just after the hour as Cole was forced off with what looked like a hamstring injury and was replaced by David Ngog.

Krygiakos again went close when Gerrard picked him out from a corner but this time headed narrowly over. Krygiakos was then involved at the other end after bundling into Davies but Atkinson deemed the Bolton captain to have gone down too easily.

Liverpool might have been struggling to produce the intensity their fans demanded but pieced together a move of genuine quality as Rodriguez finally got into the game midway through the second half.

Rodriguez sent Gerrard away down the left with a clever backheel and the captain whipped in a cross for Torres.

Torres nodded back down for Rodriguez to attempt a spectacular overhead kick which went just inches over. Bolton replied as in-form Johan Elmander, looking for his first home goal of the season after hitting five away, showed great control and drove just wide of the post.

Zat Knight then headed over from the resulting corner and Davies also glanced a header wide from a free-kick as the Trotters enjoyed a strong spell.

But Liverpool roused themselves late on and carved Bolton open with a delightful move to set up the winner for Rodriguez. Torres was the creator as he nutmegged Gary Cahill with a clever backheel and Rodriguez raced through. The Argentinian showed great composure as he clipped the ball in off the body of Jaaskelainen.