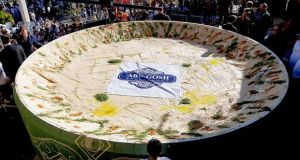 Israeli Arabs and Jews gather around a world record-breaking 4,090kg dish of hummus in the Arab town of Abu Ghosh, outside Jerusalem, yesterday. Israel beat the Lebanese record of 2,056kg, set in Beirut in October. Photograph: David Vaaknin/AP Photo

RESIDENTS OF the Israeli Arab village of Abu Ghosh called it the “third Lebanese war” as they pulled out the stops yesterday to set a new world record for the biggest plate of hummus.

The 1,000 people, Jews and Arabs, who packed on to the main road running through the village celebrated wildly as blue and white balloons, representing the colours of the Israeli flag, were released into the sky, together with doves, symbolising peace.

Mr Brockbank tested the weighing scales, and then watched carefully as a team of 50 chefs poured in and stirred chickpeas, lemon juice, tahini, garlic, salt and olive oil. Any other ingredients would have disqualified the record attempt.

Just to make sure, he tasted the final product before handing over the certificate to the event organiser and owner of the Abu Ghosh restaurant, Jawdat Ibrahim.

Mr Brockbank, who travels the world verifying Guinness world record attempts, told The Irish Timeshe had never witnessed anything to match the hype around the latest chapter of the “hummus wars” between Israel and its northern neighbour, Lebanon.

“I’ve certainly never been filmed arriving at an airport before. I didn’t expect it to be as massive as this,” he said.

He was impressed with the Israeli hummus. “I would describe it as creamy, rich, with a nutty kind of flavour,” he said. “Definitely one of the best I’ve ever tried.”

When Lebanese chefs set the hummus world record in October, overturning a previous Israeli record, there was much fanfare and talk of reclaiming a Lebanese culinary heritage usurped by Israel.

Inexpensive and nutritious, hummus is the great culinary leveller, enjoyed by rich and poor across the Middle East.

Everyone in Israel has their favourite hummus eatery, but the purists would agree that the best hummus is invariably Arab-made.

Abu Ghosh is known as the hummus centre of Israel, and on weekends thousands of secular Israelis descend on the village to dip their pitta bread in hummus served up by dozens of competing restaurants.

Mr Ibrahim, a native of the village who became a multimillionaire after winning the Illinois State Lottery, spent more than €200,000 organising yesterday’s event, which he planned after watching the Lebanese record in October.

“I intend to keep this new record for as long as possible,” he said. “If the Lebanese beat me, I’ll be ready again to top them.” He may not have to wait too long.

Lebanese tourism minister Fadi Abboud said that his country plans to beat the new record in the spring with an even bigger plate of hummus prepared on the border with Israel.

Workers diagnosed with Covid-19 or certified to self-isolate can claim special illness benefit 19:52
Authorities urge mask wearing as coronavirus on the rebound in Europe 19:54
Main points: What restrictions have been imposed on Kildare, Offaly and Laois? 19:43
Warning of ‘economic meltdown’ in Kildare 19:28
Midlands lockdown: Movement restrictions in place for residents of Kildare, Laois and Offaly 19:22