Is this the way to make airports safe? 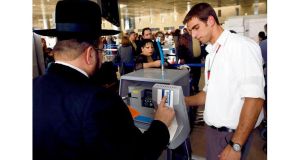 Double take: full body scans may help to identify passengers carrying weapons (such as the man carrying a knife, right), but at Israels Ben-Gurion International Airport, above, it is the human factor that makes it one of the safest airports in the world. Photographs: Phil Noble, Ronen Zvulun/Reuters 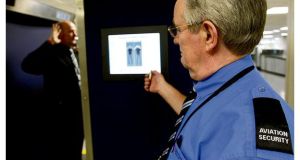 Double take: full body scans may help to identify passengers carrying weapons (such as the man carrying a knife, right), but at Israels Ben-Gurion International Airport, above, it is the human factor that makes it one of the safest airports in the world. Photographs: Phil Noble, Ronen Zvulun/Reuters

Undoubtedly a prime terrorist target, Tel Aviv’s Ben Gurion airport hasn’t seen a major incident in 30 years and no aircraft has ever been hijacked there. But the measures used are sometimes controversial, writes MARK WEISSin Tev Aviv

ISRAELI SECURITY experts call it “the human factor”. This, they stress, is what explains the country’s success in combating the terrorist threat in the air. Because when you think of airport security, you must think of Israel. Despite the ongoing security threat it faces, the country’s main airport, Ben Gurion – just outside Tel Aviv – has not seen a terrorist incident in more than 30 years. It is considered one of the safest airports in the world. Israel’s national airline, El Al, is also generally considered to carry out the most stringent security checks of any national air carrier. No plane leaving Ben Gurion has ever been hijacked.

They call it the “human factor” but some elements of the Israeli approach are controversial as ethnic profiling of passengers plays a central role in Israel’s multi-layered security approach.

All passengers travelling to and from Israel are questioned by security staff. For Jewish Israelis, the process takes a couple of minutes at most, with passengers being asked whether they packed their luggage alone, and whether anyone had access to the luggage once it was packed. Jewish tourists also usually pass through security within a few minutes, particularly if they can speak a bit of Hebrew or are frequent visitors to the Holy Land.

Non-Jewish tourists tend to be questioned a bit more thoroughly, and may be grilled over the purpose of their visit and about their accommodation. Questions may be repeated several times in a slightly different format, and family members may be asked the same questions to spot inconsistencies.

However, the procedure for Arabs and Muslims can often be lengthy and irritating, ending with a full body and baggage search. Visitors who have passport stamps from countries hostile to Israel are also questioned intensively in what can be a traumatic experience for the uninitiated.

Some foreign journalists who have arrived from states such as Syria and Iran, usually via Jordan or Cyprus, have had laptop computers and even notebooks confiscated, only to be returned weeks later. Anyone admitting to leaving their luggage at an airport or bus station left-luggage area before check-in will have their suitcases stripped, with each item individually checked and re-packed.

Only when the security staff are convinced that a passenger does not pose a security risk will the person being questioned be permitted to proceed to the check-in desk.

In 2008, Israel’s supreme court rejected a petition presented by a group of disgruntled Israeli Arab citizens, backed by the Association of Civil Rights in Israel, demanding an end to ethnic profiling as discriminatory and illegal. Although airports around the world are investing huge sums on state-of-the-art technology, including full-body scanners, the Israeli approach believes the secret lies in a combination of hi-tech and well-educated, highly-trained security staff asking the right questions of the right passengers.

However, Israel is not averse to experimenting with new technology. This week, Ben Gurion became the first airport in the world to try out a new biometric security programme on some El Al frequent flyers. Data such as fingerprints and facial imaging samples are used to create a biometric signature that is stored on a smart card, these passengers’ passports are scanned, and some of the security questions are computerised. A spokeswoman for the Israel Airports Authority, reported in the Jerusalem Post, said guards would be next to the computers to assist passengers. “We’re not giving up on human interaction,” she added.

Shlomo Harnoy, vice president of the Sdema group, an Israeli security consultancy firm which specialises in aviation security, believes Umar Farouk Abdulmutallab, the Nigerian who tried to blow up the Detroit-bound Northwest Airlines aircraft on Christmas Day, would have been detained “within seconds ” at Ben Gurion airport.

According to Harnoy, a young Muslim travelling alone, on a one-way ticket, with no luggage, was an obvious suspect.

Harnoy, who once headed the Israel Security Agency’s aviation security department, believes investing millions in new technology is not the answer. “Whoever is concentrating on stopping old ladies bringing a bottle of mineral water on to the plane will not find the terrorist, or the bomb. The old lady is not a suicide bomber and the bottle of water is not a bomb component.”

Not only do most Israeli security selectors have degree-level education, they are trained to the highest standards. The most important element in the “human factor” is that the security guards understand the threat.

El Al security staff at London’s Heathrow airport were able to thwart a potential plane bombing in April 1986 when Anne Marie Murphy, a pregnant Irish woman living in London, tried to board a plane to Israel carrying an explosives-laden bag. The bomb had been prepared, without her knowledge, by her boyfriend and father of her baby, Jordanian Nezar Hindawi, allegedly recruited by Syrian intelligence.

Murphy had no idea she was carrying a bomb and her profile did not match that of a potential terrorist, but intelligent questioning by El Al security staff thwarted the plot.

Ethnicity is only one component of the airport security check. Selectors are also considering the background, documentation and behaviour of the passenger being questioned.

THE HUMAN FACTORis only one layer in the wall of security:

– All luggage is put through a decompression chamber simulating flight pressure that could trigger an explosion.

– El Al aircraft have been equipped with electronic countermeasures following an unsuccessful missile attack on an Israeli aircraft taking off from Mombasa airport in Kenya in 2002.

The Israel Security Agency, formerly known as the Shin Bet, has overall responsibility for providing security at Ben Gurion and for El Al flights abroad. Maintaining such a high level of security does not come cheap and it is estimated that the government pays about half of the total cost.

According to Shlomo Harnoy, the world has no choice but to spend more and more on aviation security. “The jihad organisations will spare no effort to carry out more attacks,” he warns. “Terrorism today is sophisticated, and therefore the response has to measured, with intelligence as the key, and the top priority being to find the potential terrorist.”