A giant drawing by artist Joe Caslin has been papered to a large wall on Dublin’s South Great George’s Street. Caslin hopes the piece will get people talking ahead of the same-sex marriage referendum. Video: Bryan O'Brien 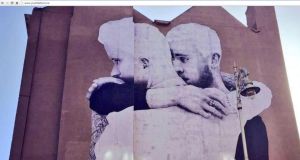 A screengrab of the website youthdefence.ie on Thursday appears to have been hacked and now features an image of Joe Caslin’s mural on South Great Georges St.

The website of anti-abortion group Youth Defence has been hacked and its homepage replaced with an image of a mural of embracing men.

The image that was placed on the website is taken from a mural recently painted on a wall on South Great Georges Street, Dublin by artist Joe Caslin.

The mural aims to encourage a Yes vote in the upcoming same-sex marriage referendum. This vote will be held on May 22nd.

Speaking to The Irish Times, a spokeswoman for Youth Defence said she did not know why the site had been targeted but said it was a “complete waste of time”.

She also said Youth Defence did not know who was responsible and that the matter had been referred to the Garda’s cyber crime unit.

“We don’t have anything to do with the referendum. We do not have a stance on it.”

She could not say when the site would be restored.

The spokeswoman said those who had hacked the website should “get a life”.

Following the hack, the Youth Defence homepage shows the mural with a ‘Vote Yes’ message as the title of the page.

No other content or links on the Youth Defence are accessible from the hacked homepage.

There has been no claim of responsibility for the attack.