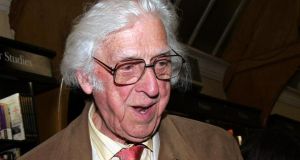 
Writer, broadcaster and former Irish Times columnist Sam McAughtry has died. He had been ill for some time.

Born in Comber, Co Down, in 1923, he declared his home to be the loyalist Tiger’s Bay area in north Belfast.

He left school at 14 and served in the RAF before leaving for the civil service.

He was a member of both the trade union movement and the Northern Ireland Labour Party but later, in his 50s, turned to writing and quickly became a well-regarded and popular storyteller and author.

He was a familiar voice on BBC Radio Ulster.

He was a founder member and head of the Peace Train Organisation, which protested against repeated paramilitary attacks on the Dublin-Belfast train during the Troubles.

Mr McAughtry’s peace and community work included many other initiatives.

He was known throughout Ireland and won election to the Seanad in 1996, an achievement of which he was particularly proud.

He told the Upper House he viewed himself as “a hybrid unionist,” claiming he was “happy to live in the United Kingdom but I am happier still to be Irish and to proclaim my Irishness”.

A supporter of the peace process, he said: “As I stated on the day of my election, it is my dearest wish to see this island inhabited by five million Irish people, living in two jurisdictions with consent, but with institutions established to emphasise their Irishness.”

Mr McAughtry’s books included The Sinking Of The Kenbane Head and On The Outside Looking In .

Stormont Minister for Culture Carál Ní Chuilín said yesterday: “His artistic contribution served to enrich life not only in the North but across Ireland and beyond.

“He added a splash of colour with his wit and storytelling.”