Mayo lake one of 235 waterways studied across six continents 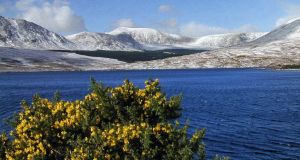 Lough Feeagh, where the surface water temperature rose at a rate of 0.35 degrees per decade between 1985 and 2009

oceans or the atmosphere, according to new research which includes data from the Marine Institute research station in Co Mayo.

A study of 235 lakes on six continents has found that the temperature is increasing at an average of 0.34 degrees (0.61 degrees Fahrenheit) each decade.

The research by more than 60 scientists, published in the Geophysical Research Letters journal, concludes that the warming could have “profound” effects in threatening freshwater supplies and ecosystems.

The study is the largest of its kind and the first to use a combination of long-term hand measurements and satellite information.

The research was funded in part by Nasa and the US National Science Foundation.

The Marine Institute measures the surface water temperature of Lough Feeagh as part of the long-term ecological monitoring of the Burrishoole catchment.

The surface water of Lough Feeagh warmed at a rate of 0.35 degrees per decade between 1985 and 2009, although the rate of warming was lower than in some other northern hemisphere lakes.

The warming of more than half the world’s freshwater supply could lead to increased frequency of algal blooms, which can strip water of oxygen and are toxic to fish and animals, the authors note. The rates imply that emissions of methane, a greenhouse gas 25 times more powerful than carbon dioxide, will increase 4 per cent over the next decade.

These range from provision of drinking water to use in manufacturing, energy production, and crop irrigation, while protein from freshwater fish was especially important in the developing world.