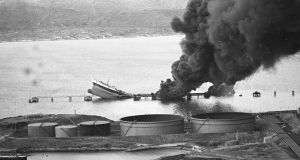 The hulk of the Betelgeuse tanker lies at the oil Jetty at Whiddy Island following the disaster. Photograph: Pat Langan

A survivor of the Whiddy Island oil terminal disaster in Bantry Bay, west Cork, yesterday spoke of the impact the tragedy continues to have on him as he marked the 35th anniversary of the calamity which claimed the lives of 50 people.

Brian McGee (68) was on duty as a pumpman at the Gulf Oil terminal on the island when in the early hours of January 8th, 1979, a fire broke out on French tanker Betelgeuse, berthed at the jetty, which triggered the inferno.

“I died that night – the Brian McGee that went to work that night never returned and I’m not the same person,” said Mr McGee who along with his colleague, John Downey, fought to keep the burning wreckage away from 12 80,0000 tonne crude oil tanks on the island.

“I spent this Christmas as I’ve spent every Christmas since, suffering from post-traumatic stress – the joy of Christmas doesn’t exist for me anymore – I can still vividly recall images from that night and unfortunately they keep re-occurring.”

Mr McGee, who is writing a memoir of his experiences that night on Whiddy Island, had hoped to attend yesterday’s anniversary Mass in Bantry for the friends he lost but he said post-traumatic stress leaves him vulnerable to illness at this time of year.

– the post-traumatic stress just wears me down. I would like to have gone because those who died were my friends – I had worked at the terminal for 10 years and I knew them all well,” he said.

Some 42 French members of the Betelgeuse crew also died in the tragedy and all were remembered at yesterday’s anniversary Mass at St Finbarr’s Church in Bantry and at a wreath laying ceremony at the Betelgeuse monument at the Abbey cemetery overlooking the bay.

Mayor of Bantry Cllr Aidan McCarthy was among those who attended and he said it was important for those bereaved that it should be remembered.

“It was a horror for the town and some people like to remember it while others want to leave it fade into the past – for those who want to remember it though, the laying of the wreath today at the Abbey graveyard was a very poignant moment as they remembered loved ones.”