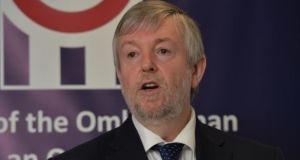 Peter Tyndall: Discovered last year that receipts and invoices held by members of the Oireachtas in relation to a 2013 audit of expenses were private and did not have to be released. Photograph: The Irish Times

Information Commissioner Peter Tyndall has called on the Oireachtas to consider changing legislation which he said prevents the disclosure of politicians’ expenses without their consent because they are “private papers”.

Mr Tyndall said that because of the way the Freedom of Information Act 2014 was framed, he had found last year that receipts and invoices held by members of the Oireachtas in relation to a 2013 audit of expenses were private and did not have to be released.

“I have to say as a personal commentary on that, that in the interests of transparency and openness I would hope that the Oireachtas might reconsider that position,” he said.

“It seems to me there is a legitimate public interest in understanding what expenses are being paid to members of the Oireachtas.”

He said not releasing them had the “perverse effect” of suggesting all might “not be well”.

“Whereas if it’s open and transparent, then all of those issues can be addressed in the public domain. It’s not a matter for me; I can only implement the legislation as it stands . . . but I would prefer to see it otherwise,” said Mr Tyndall on Wednesday as he published his annual report for 2015.

“We’ve always argued that the best way of making information available to the public is to publish it in the first place and not require people to make requests under FoI in order to access it,” he said.

Mr Tyndall said it was noteworthy that some public bodies which had been subject to the provisions of the Act for many years continued to fall short in meeting their statutory requirements.

The commissioner was critical of the Department of Justice in particular. He noted his office had dealt with several cases during the year where the provisions of the Act were not complied with.

He proposed to continue to engage this year with the department and other bodies whose FoI practices have been “particularly poor”.

Public bodies received almost 28,000 requests under Freedom of Information legislation last year – an increase of 38 per cent. Mr Tyndall attributed this in the first instance to the abolition of fees for FoI requests under the new Act.

The Information Commissioner accepted 332 applications for reviews by his office, an increase of 80 per cent.

Mr Tyndall said that at the beginning of last year, he had set challenging targets aimed at improving case turnaround times and optimising the percentage of cases closed by his office within four months.

Of the 125 reviews on hand in his office at the end of the year, 93 per cent were less than six months old, with just three being older than eight months.