Wasted food costing households as much as €700 a year

Up to 68% say main reason they throw out food is because it is out of date, report finds 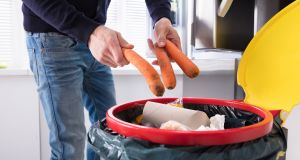 People’s inability to properly police what is in their fridge is costing households as much as €700 a year and contributing to the climate catastrophe, according to a report from the Environmental Protection Agency (EPA).

More than two thirds of Irish people say the main reason they throw out food is because it has past its use-by date, while only 10 per cent say they are any good at keeping on top of what they have in their fridge.

The agency has started a campaign which aims to encourage people to take the simple action of freezing surplus food before its use-by date in order to save money and reduce the impact food production processes and waste have on the environment.

It pointed to a survey, carried out on its behalf by Behaviour & Attitudes, which found that 68 per cent of people still say ‘passing use-by dates’ is the top reason they throw out food at home.

Freezing surplus food before it passes the use-by date can help both the environment and your budget, according to Mary Frances Rochford of the Office of Environmental Sustainability.

“We are calling on everyone to support and share our Eat It or Freeze It campaign on social media, and take a simple action to stop food waste,” she said.

The EPA’s Odile Le Bolloch said that as many as half of the people polled did not realise they can “freeze food right up to its use-by date. It is a great way to make food last longer - it acts just like a pause button, allowing food to be eaten at another time.”

The EPA said many types of food can be frozen, “whether it’s the extra loaf of bread you bought or the cooked pasta you want to use for lunch later in the week”.

The survey showed that bread is one of the most wasted foods in Ireland, and when it comes to freezing it is the most versatile – the whole loaf can be frozen when you buy it, or just the last few slices at the end of the bag.

Meanwhile one food that does not appear to be going to waste are eggs with a separate report from Bord Bia suggesting that the most humble of food has been growing in popularity in the time of Covid.

Over the course of the year egg consumption has climbed by 11 per cent with over 656 million eggs sold in Ireland over the last year.

New research from Bord Bia shows that shoppers in Ireland consumed even more eggs during the first national lockdown.

The 12-week period from April to July saw a significant growth of more than 20 per cent in consumption as people turned to baking in a big way.