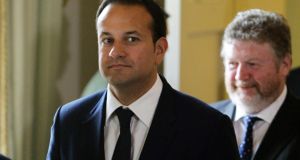 Former minister for transport Leo Varadkar (left): The Department of Transport, Tourism and Sport has issued a marine notice with details of the beacon safety recall. Photograph: Brian Lawless/PA Wire

Owners of hundreds of emergency position indicating radio beacons (EPIRBs) in the Irish fishing and sailing fleets have been warned that the units may not work in emergencies.

It is understood that up to 600 r egistered users of the devices in Ireland may be affected.

The recall notice comes almost a year after the company issued a precautionary safety alert, prompted by issues which arose after the loss of three Irish brothers drowned off Co Waterford.

Testing of the EPIRB used by Paul (49), Kenny (47) and Shane (44) Bolger from Passage East, Co Waterford found that the EPIRB with their 19 ft punt, Deanne Leanne (italics) failed to activate after the boat capsized in Tramore Bay in June 2013..

All three brothers had been wearing lifejackets, and may have relied on the EPIRB activation with water to alert rescue agencies to their location.

The manufacturer has said that after “exhaustive testing”, it has “identified a fault in the microprocessor of certain units that effectively shuts the beacon down”.

“We are concerned that the beacon may not work in an emergency situation,”it says, and it issued the recall in consultation with national maritime authorities.

The Department of Transport, Tourism and Sport has issued a marine notice with details of the product safety recall.

The Australian manufacturer also reminds all EPIRB users “regardless of the brand” to regularly test their unit, and to ensure batterie are replaced at intervals.

Owners of affected units are asked to contact GME at email recall@gme.netau or their local distributor to arrange a replacement beacon at no extra charge.

Mr David O’Mahony, secretary of the Derrynane Inshore Rescue Service in Caherdaniel, Co Kerry, said that the recall notice required urgent advertising by the Department of Transport, as a marine notice was not sufficient.

“Many boats rely on these beacons, and if they don’t go off in an emergency situation, we don’t have a rescue - we have recovery,”Mr O’Mahony said.

A 65-year-old man with a hip injury was rescued from an island by Derrynane Inshore Rescue Service yesterday (fri) and flown by Irish Coast Guard helicopter to hospital in Tralee.