Victim of Storm Ophelia remembered as a ‘real gentleman’ 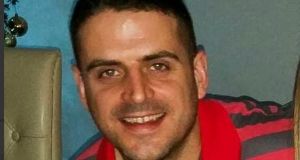 Fintan Goss, who died during Storm Opelia on Monday.

The last letter Pamela Goss wrote to her husband, Fintan (33), whose funeral took place in Ravensdale, Co Louth, on Saturday, was on the night before their wedding 16 months ago.

“In the letter I told you, ‘I have loved you for over half of my life so far’. Even though, for some strange reason, we have only been husband and wife for 16 months, let’s not dwell on that. We were childhood sweethearts,” she said at the funeral Mass.

Fintan Goss died on Monday, during Storm Ophelia, when a tree fell on his car in the early afternoon. He is understood to have left work early to spend the rest of the day at home in Ballymakellet near Ravensdale, with his wife and their two children, Laragh (3) and baby Henry.

“I am so totally broken to be physically saying ‘goodbye’ to you,” said Pamela. “But please know I am content that I achieved with you all the important things that you wanted – happiness and family.

“I am so proud standing here today as your wife . . . and I will love you until the day I see you again.”

St Mary’s church in the rural village was full to capacity, with hundreds more mourners outside, as Fr Brian White received the remains of Fintan to the church shortly after 11.30am. Soprano Lisa McGuinness sang Con te Patirò (Time to Say Goodbye) as the coffin was brought into the church.

During the service, Fr White told mourners that Fintan had “fit so much into those 33 years.

“Though born and reared here in Ravensdale, he built a really perfect family home in Ballymakellet, most of which he oversaw himself. Before settling down Fintan loved to travel. He spent many summers travelling in Asia with friends and later travelling around the world with his beloved Pamela.

“Fintan and Pamela, you both knew you had met the love of your lives. There was an instant bond and what resulted was 16-plus years of fun and enjoyment. Fintan often said of Pamela he made an order to God to find him the perfect woman, and God delivered.

“They had genuine respect and appreciation for each other. They both wanted the same things in life and they achieved them all together. He achieved everything he wanted in life. Most especially, Pamela, you gave him the two greatest gifts that anyone could ever give him – his beautiful princess Laragh and beautiful baby boy Henry.”

The priest described Fintan as a man of laughter and joy, and also a “very decent man, a real gentleman” who “loved his ma and his da”. He was the youngest of four, said Fr White, and he had often joked that the reason he was the youngest was because in him his parents had found “perfection”.

The gifts brought to the altar were three photographs – one of Fintan with his siblings, one of his children and another of him with his wife on holiday – and a football jersey for the Lumpers, the local winter league team of which he was a member.

Other songs performed by McGuinness included Amazing Grace, while a young cousin, Kristina Goss, sang the Oasis song Slide Away, which she also sang at Fintan’s wedding last year. It includes the lines: “I dream of you and we talk of growing old/But you said please don’t/Slide in baby/Together we’ll fly/I’ve tried praying but I don’t know just what you’re saying to me/Now that you’re mine/We’ll find a way/Of chasing the sun.”

As the remains were carried from the church, Van Morrison’s Into The Mystic played. Burial followed in Calvary Cemetery.

Mourners were led by Ms Goss, Fintan’s parents Mary and John, his sister Maria and his brother Colin. Another brother, Ronan, was killed in an accident while studying in Scotland in 2000.