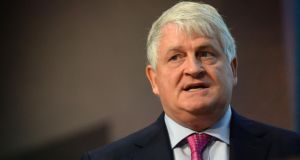 A speech by Fianna Fáil TD Colm Keaveney that has emerged as the central focus of businessman Denis O’Brien’s legal action against a Dublin public relations firm is understood not to have been delivered.

Mr O’Brien has begun a High Court action against PR firm Red Flag Consulting, which is chaired by former chief executive of Independent Newspapers Gavin O’Reilly, claiming that it is involved in a conspiracy against him.

In court yesterday, Mr O’Brien’s barrister, Michael Cush SC, said “various versions” of a draft Dáil speech for Mr Keaveney were held on the memory stick that was delivered anonymously, he said, to Mr O’Brien.

The draft speech for the Galway East TD containing “precisely words and phrases”, written by Red Flag chief executive Karl Brophy, were “ultimately delivered then under privilege of the House”, Mr Cush told the court.

Newspaper cuttings concerning Mr O’Brien and his companies Siteserv and Digicel, which form the great bulk of files on the stick, were essentially “appendices” to the other files.

Mr Cush indicated the key one of these was a draft speech written for Mr Keaveney. However, the speech on the memory stick in several draft forms was not actually delivered, The Irish Times understands.

Instead, Mr Keaveney did speak in the Dáil as part of a June 9th debate on IBRC, Mr O’Brien and Siteserv. During the debate he made, under privilege, a series of allegations about Mr O’Brien.

According to the official Dáil record of the debate, the TD described Mr O’Brien as “one citizen in this country and the influence he has with respect to favours and becoming a favoured person within society”, who had been “enriched” by government decisions”.

Mr Keaveney said: “Criminality was already uncovered by the Moriarty tribunal, which confirmed the largest single act of public corruption in monetary terms.

“Where is the Garda investigation? Where is the Criminal Assets Bureau, CAB? Why is the Director of Public Prosecutions, DPP, not seeking to prosecute the criminality that was identified?”

According to the record, the TD continued: “The Moriarty tribunal found that Denis O’Brien, the man who cannot be named, had links to Fine Gael. A former minister, who is a Member of this House, managed to secure meetings in the corridors of power with the current Taoiseach, Deputy Kenny, and with the current Minister for Jobs, Enterprise and Innovation, Deputy Bruton.

“Large sums of money went from Denis O’Brien to Michael Lowry and Fine Gael. That is fact yet we have the audacity to come into this House and discuss a new commission of investigation while the report of the Moriarty tribunal gathers dust.”

With reference to the draft speech, Mr Cush suggested the allegations about Mr O’Brien had been written by Mr Brophy, whose intervention in the file had been detected by IT experts hired by Mr O’Brien .

“What is Mr Brophy saying?” asked Mr Cush. “Is he saying: ‘That’s nothing to do with me, your expert is wrong’? Or is he saying: ‘Yes, I did do it.’ In which case it begs the question: who paid him to craft the speech to be delivered under privilege in the House? These are very simple questions.”