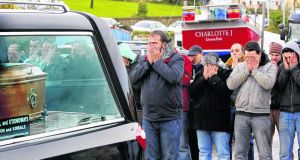 Minister for Transport Leo Varadkar has said he will consider concerns raised over the handling of emergency calls from the trawler Tit Bonhomme after it hit rocks in west Cork 18 months ago.

Mr Hayes (52), from Helvick Head in Co Waterford, and four of his five crew, Kevin Kershaw (21) from Clonakilty in Co Cork and Egyptians Wael Mohamed (35), Attiy Shaban (26) and Saied Alieldin (22), all died after their vessel hit Adam’s Island at the mouth of Glandore harbour on January 15th, 2012.

The Department of Communications is already reviewing the emergency call service in the light of issues that arose at the inquest last May into the deaths of the five men.

It is understood that neither the Irish Coast Guard, which is responsible for search and rescue, nor the Marine Casualty Investigation Board (MCIB), which undertook the State’s official inquiry into the sinking, were aware that not one but two emergency calls had been made.

Both were made from a mobile phone owned by the youngest crew member, Kevin Kershaw, as the vessel’s VHF radio was no longer working.

Mr Varadkar told The Irish Times the MCIB was “independent under law and the Minister cannot interfere in its functions, much as he cannot interfere with or change the decision of a court”.

“I listened intently to Ms Uí Aodha’s concerns about the handling of the emergency call. This is not a matter that is entirely under the remit of my department, but I have agreed to consider her concerns about it,”he said.

“I really want to emphasise again, however, that our focus must be on preventing accidents at sea from happening in the first place.”