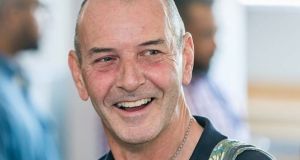 Hundreds of friends and colleagues of the late educator John Curran filed into the public theatre of Trinity College Dublin on Friday to pay tribute to a man whose life was tragically cut short in South Africa earlier this month.

Mr Curran (60) was stabbed to death in his city centre apartment in Cape Town, where he had been working as an educational director for thousands of children in the city’s townships.

However, it was the nature of his life, not his death, which drew focus during the ceremony. He was celebrated as a father and grandfather whose passions lay in family and life, projects and pastimes, coffee and cigarettes.

“Dad was also young at heart. He lived life. He was constantly learning, regularly starting something new,” his son Darragh said in the first of a number of tributes.

Mr Curran grew up in Drimnagh. His father Frank, a cooper for Guinness and a lover of classical music, instilled in him a natural gravitation toward carpentry and choirs. He later became a member of Dublin’s Cantando which sang a number of his favourite pieces during the ceremony.

The gathering heard how Mr Curran’s creative abilities had manifested themselves in the production of everything from beds, desks and house extensions to a wooden cross, carved to mark his own father’s grave.

“Half our house was filled with furniture he made from stuff he found in skips,” Darragh recalled fondly.

Mr Curran’s son Donal spoke of the quality time spent with his father whom, he said, had quietly cherished the joy of his own family’s company.

“My dad was always just unbelievably delighted to be around us... it was a pure and true form of happiness,” he said.

Mr Curran began teaching in 1975 and was principal of Edmondstown School in Ballyboden before helping establish the Good Shepherd national school in Churchtown.

His former colleague and friend Dympna Walsh told the service how he had introduced an early computer room and quickly established the school’s reputation for teaching children with special needs. He was from early on, she said, “a gifted leader with a wonderful vision”.

During his earlier college days, his close friend Angela Griffin recalled how he and others had been arrested following a student sit-in protest, an achievement that had made him a “hero of the hour” – early signs of the popularity that would follow him in life.

Ms Griffin spoke of his pride as a father of four and what he had to offer as a grandfather.

Darragh spoke of his own dreams for the years ahead.

“We won’t have that,” he said, “but we will work hard to show him how wonderful a human he was.”

South African police have released CCTV images of an unidentified man they want to question in connection with the murder of Mr Curran.