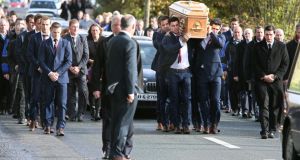 The remains of Niall Donoghue are carried by friends and team mates through Kilbeacanty today. Photograph: Joe O’Shaughnessy/The Irish Times

Over 1,000 people attended the requiem Mass in the tiny parish church, where a guard of honour was formed as Donohue’s coffin arrived from home, draped in his club colours of saffron and royal blue.

A hurl, a white helmet and a Galway “number 5” team jersey worn by the young inter-county hurler were placed on his coffin, along with his “number 6” jersey for Kilbeacanty club and a Bible, representing his faith.

Fr Callanan told the packed congregation that he had received messages of sympathy from all over the country and as far away as Nigeria since the young man’s unexpected death shortly before his 23rd birthday last Wednesday.

This was a “sad day for the Kilbeacanty GAA team and the associated Michael Cusack’s club of younger players,” Fr Callanan said, and there were occasions in life when one had to ask “why” this happened, and on this occasion why it had happened to Niall Donohue.

There was often a sense of “betrayal by God” in addition to the sense of desolation felt, Fr Callanan said, and the psalms were “full of cries like these”.

Yet “God does not send us crosses to pin us to the ground”, rather they came to us as “a part of life”, he said.

When death was “sudden and unexpected and tragic, as in the case of Niall”, the family suffered the loss of a son and a brother who was very dear, Fr Callanan continued.

“They tell us there is no safe shortcut through bereavement”, but “the love we have for a loved one does not end in death”, he said.

Fr Callanan quoted the words of Galway hurling manager Anthony Cunningham, who had told Seán Moran of The Irish Times how Donohue was “a unique character” who “didn’t have a lot to say” but was “very witty and got on well with everyone on the team”.

“He just loved to play,”Cunningham had said. “In his hurling, he was a free spirit and loved the challenge, the battle. He had tremendous pace and in the agility tests he was far ahead of the panel, and when we measured strength, it was the same...”

“Niall led a good life, a short life, a happy life and he enjoyed his hurling,”Fr Callanan noted. “We must as a community look out for each other and look out for the signs of difficulty in a person’s life.”

A poem attributed to David M Romano, “When tomorrow starts without me” was read on behalf of Ciara Reilly, Donohue’s girlfriend, and cousin Ciaran Donohue thanked various members of the community on the family’s behalf.

In a tribute, cousin Neil McDonagh spoke of Niall Donohue’s ability as a hurler and described him as “ a man of the people, never above the people”, who was “always himself” whether talking to a seven-year-old down in the hurling field or shaking a president’s hand.

“Galway was your county, but Kilbeacanty your country...the centre of your life,”McDonagh said, recalling how his cousin’s faith was such that he played with a miraculouos medal sewed into his shorts.

“Niall’s death was not a decision, it was a struggle,”McDonagh said, speaking of his cousin’s commitment to honesty and his “big radiant smile”.

“The truth is that Niall’s life ended in a way that leaves us confused and hurt”, he said.

Were “here today”, he would be “telling us to go back in and speak a second time”, Mc Donagh said, just as Niall had done one summer Sunday when he had something additional he wanted to say in confession - and had the courage to return to the church to do so.

Just as county players had borne the player’s cofin through Kilbeacanty village to the church, so his club mates carried it in relays to Moran’s Hill and on to Rakerin cemetery. There he was buried beside his mother Mary, who died in 1996.

At the graveside, Kilbeacanty GAA club chairman Justin Fahy spoke of Donohue’s many achievements, including winning All Ireland under-21 and playing two all-Ireland senior finals in one year.

When he won the Leinster championship, he had taken the Bob O’Keeffe cup to the two schools in the parish, where the children “idolised” him, Fahy recalled.

He spoke of the hurler’s contribution to the community, to his game, and how, before he had ever graced the hallowed grounds of Tipperary’s Semple Stadium and Dublin’s Croke Park, Niall Donohue had “played his first all-Ireland” on the lawn of his house at Ballyturin.