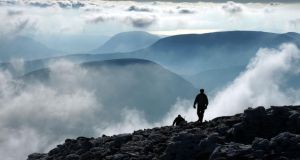 Above the clouds near the summit of Carrauntoohil, MacGillicuddy’s Reeks, Co Kerry. Photograph: Mick Crowley

Three people have been rescued from close to the top of Carrauntoohil, Ireland’s highest mountain.

Kerry Mountain Rescue have issued a warning to climbers and walkers not to venture on the MacGillycuddy’s Reeks at all because of gullies packed with hard snow and ice.

All the high mountains of Kerry should be avoided at present, the rescue team warned.

The three climbers, two men and a woman, became stuck on very steep ground close to the summit on Saturday afternoon.

Rescue services were alerted at 4.15pm and the Shannon-based Irish Coast Guard Rescue 115 helicopter managed to ferry equipment and some of the rescue team to the scene.

However, the stranded climbers could not be lifted from the gully and team members abseiled down to them. They then used ropes to bring them to the summit from where they were rescued. None was seriously injured.

Team rescue spokesman Damien Courtney issued a warning to climbers. “Conditions on the MacGillycuddy’s Reeks are very dangerous at present with hard packed snow in all gullies particularly around Carrauntoohil, and ice exposed ridges,” he said.

Unless very experienced in winter mountaineering and “well-equipped” for winter conditions on high ground, climbers and walkers should stay away from steep ground on the Reeks, Mr Courtney said.

Ice axes and crampons were currently “absolutely essential” on high ground, he said.

See kerrymountainrescue.ie for information and advice on climbing and hill-walking in the area.