The Question: Is violence ever acceptable as entertainment?

Mixed martial artist Joao Carvalho died after fighting Charlie Ward. Watch the likes of ‘Batman v Superman’ and you see that relentlessly violent images are all around us 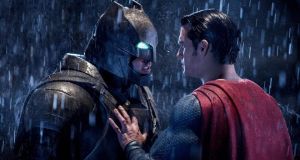 On a side street in Temple Bar is a mural of Conor McGregor that reads “Long Live the King”. McGregor has a UFC belt draped over one shoulder. In his left hand he raises the head of his rival fighter José Aldo. In the background are piled the skulls of his previously vanquished foes. It’s cartoonish, for sure, but if ancient Rome put up murals of popular gladiators they would have looked like this.

In the wake of last weekend’s death of the Portuguese mixed martial artist Joao Carvalho after a bout in the city against Charlie Ward, there has been much discussion about the appropriate limits of aggression and violence in sport.

The Irish Times sportswriter Johnny Watterson described the fight that killed Carvalho as legal killing; the sport, he wrote, is less a privilege of watching talented athletes and more an episode of cage pornography.

The debate has largely avoided acknowledging that it is not just sport that packages up violence as entertainment.

Batman v Superman: Dawn of Justice is a mainstream film ostensibly made for children. Yet, amid the critical derision it generated, there was little discussion of the relentless ferocity of its violence: the slow-motion punches, crunching headbutts and bone-snapping kicks.

That lack of discussion highlights how ubiquitous such depictions of violence are in popular culture.

There is no point pretending that we are not a violent species, and that men in particular don’t gain a stimulating thrill from viewing violence. Still, the “civil” part of our civilisation is supposed to distinguish us from our barbaric past, from the days of crowds watching gladiators fight to the death.

Once we accept that watching people being pummelled to a pulp qualifies as entertainment and escapism, whether in sport or in fiction, we need to confront some very problematic questions about our values. We might not like the answers.