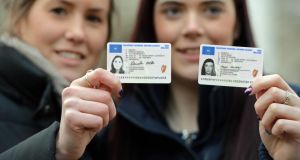 Operations at the National Driver Licence Service are running normally again after an IT problem left members of the public unable to renew or obtain new licences on what was the first day of the new service.

The service changed today meaning members of the public seeking a new license or a renewal must now visit one of the service’s new centres rather than the motor tax office.

As part of a face-to-face application process, a photo and signature is captured digitally on plastic licenses.

The glitch affected 12 centres located “predominantly” in the northwest of the country, according to a spokeswoman for the service.

There was also disruption to the customer helpline which was out of service for “a brief period” this morning.

Callers to all 34 national centre offices were affected between 10am and midday – but the spokeswoman said the helpline is now up and running again.

“There have been a few teething issues with the ‘Go Live’ of the new NDLS service today, which is to be expected with the introduction of a new national service,” said the spokeswoman.

“As soon as the issue was identified remedial action was taken and we can report that the issue has now been fixed.

“We would like to thank the public for their patience today as we introduce the new National Driver Licence Service and get it bedded in.”