Taste of Dublin gets started under cloudless skies

Dominique McMullan takes a tour around the Taste of Dublin festival and chats to Michel Roux Jr and Kevin Thornton about what people can expect. Video: Daniel O'Connor 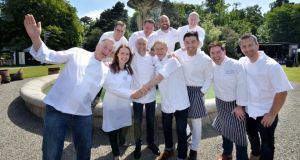 The 10th Taste of Dublin began under cloudless skies as the first of 37,000 people expected to attend the four-day event arrived on site in Iveagh Gardens.

The Taste of Dublin first began in 2006 and has survived the recession to emerge as a fixture of the summer calendar in Ireland.

Organiser Avril Bannerton anticipates that the crowd this year will be up on the “helicopter years” of the Celtic Tiger.

Tickets have sold out for Thursday and Friday evenings. Some 2,500 foreign visitors are expected for the weekend.

The weather looks good for Thursday and Friday. Saturday and Sunday will be mostly dry and bright with the odd shower. Nothing like the bad weather which affected the recent Bloom festival is expected.

The concentration of culinary talent at one event is unprecendented with 10 Michelin-starred chefs having a presence on site at Iveagh Gardens over the four days.

Among them are Derry Clarke, Ross Lewis, Kevin Thornton and Michel Roux Jr.

The launch on Thursday morning was unfortunate timing for the Minister for Agriculture Simon Coveney who arrived early and spoke of the privilege of being a minister just minutes before news broke elsewhere of a suspected BSE case in Co Louth.

“Irish food has moved into the premium space at a chef level and production level. We are as good as any country in the world at not just producing food but preparing it.”

No sooner had he spoken the words but he had to hurry away to deal with the news.

This year’s Taste of Dublin festival has 21 restaurants and almost 100 artisan producers showcasing their wares.

The food and drink industry emerged from the recession with its reputation enhanced.

Mr Coveney said agriculture is the most important sector directly and indirectly 200,000 people, but had been described by previous governments as a “sunset industry”.

BSE notwithstanding, the news is unlikely to affect either the festival this weekend or the long-term future of the agricultural industry in Ireland.

Irish chefs have travelled and brought a cosmopoliton edge to Irish cooking which had not been there in the past. “The food scene in the big cities especially Dublin is vibrant,” he added.

Another Michelin starred chef Kevin Thornton said there was no cause for complacency about Irish food despite all the warm plaudits it has been attracting.

“We need to be the leaders of what we do rather than doing things just because England did this or Copenhagen did that,” he said.

“How many countries can you go and collect your own scollops, seaweed and come back for service? We have amazing produce.”