Supervalu says it is not involved in boycott of Israeli produce 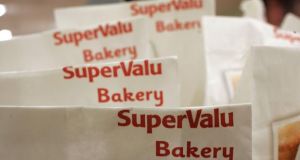 SuperValu last night moved to clarify a newspaper report which yesterday claimed the supermarket chain was involved in a boycott of Israeli products due to the ongoing conflict in Gaza.

Supervalu last night moved to clarify a newspaper report which yesterday claimed the supermarket chain was involved in a boycott of Israeli products due to the ongoing conflict in Gaza.

A report in the Herald claimed a group-wide email was sent to its 232 stores nationwide, stating that products originating from Israel were to be withdrawn and disposed of “at store level”.

Following queries from The Irish Times last night, a statement from Supervalu, which is part of the Musgrave Group, said the chain “is not involved in a boycott of Israeli produce” and has a policy “of not taking a position on international affairs”.

“Supervalu has a long and proud history of supporting Irish producers as much as possible,” said the statement. “75 per cent of products in our stores are produced and sourced locally in our communities.

“However, due to the unpredictable climate in Ireland there are occasions when we are required to source products from further afield in order to meet customer demand. We prioritise supply from the UK and Europe when Irish product is not available.

“Supervalu is not involved in a boycott of Israeli produce and ultimately consumers will make their own purchasing decisions. We understand that this is an emotive issue, however, we have a policy of not taking a position on international affairs.”

The Mandate petition, entitled ‘Stop Selling Israeli Produce’, has already attracted over 6,300 signatures since it was launched last Friday. It asks customers to sign a statement calling on Aldi, Dunnes Stores, Lidl, Marks & Spencer, Supervalu, Tesco, and others to stop sourcing products from Israel, which it says continues “to flagrantly breach international law and commit war crimes against the Palestinian people”.