Members of Dublin Shakespeare Society read from Ulysses at Glasnevin Cemetery where Paddy Dignam's funeral took place in chapter six, "Hades", of the book. The event was one of many that celebrated Bloomsday in Dublin yesterday. Video: Bryan O'Brien 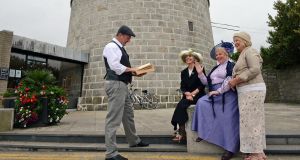 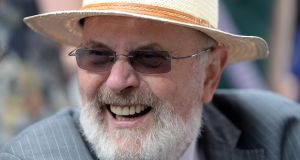 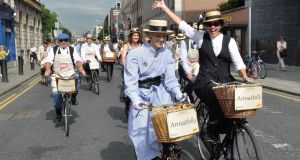 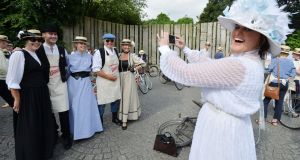 Sweating in sun did not deter the Joycean enthusiasts who donned full length Edwardian costumes from taking part in a events across Dublin city to celebrate Bloomsday.

Celebrations kicked off at 8am with a traditional Bloomsday breakfast at the James Joyce Centre, complete with some tasty inner organs on a platter.

Minister for Tourism Leo Varadkar said he was delighted to attend a Bloomsday event for the first time.

He presented a limited edition hardback copy of The Dublin Illustrated Edition of Ulysses as a thank you to the volunteers at the James Joyce Tower and Museum in Sandycove earlier today.

The book includes an introduction by Bob Joyce, the great nephew of James Joyce and illustrations by Emma Byrne.

“The truth is if it wasn’t for the volunteers, the tower would not be operating,” Mr Varadkar said.

The Martello tower was built in 1804 and was opened as the James Joyce Museum in 1962.

It was temporarily closed in 2012 due to staffing resources.

It is now run by Fáilte Ireland and Friends of Joyce Tower Society, who have two people greeting visitors every day keeping it open for the full year.

Mr Varadkar said volunteers had a “genuine love” for the work they carried out.

The museum and events across the city have been packed dedicated Joyce fans from countries around the globe to celebrate the leading literary figure.

The day is named after Joyce’s main character in Ulysses, Leopold Bloom, as the novel follows his life and a host of other personalities from 8am on June 16th, 1904 to the next day.

Julie Beckett, friends of Joyce Tower chairwoman, said more than 800 people visited the renovated tower renowned for when Joyce, then 22 and at the beginning of his career, stayed for six days.

She said the group had about 160 volunteers on their database.

“We all really enjoy what we do.”

A volunteer, Brenda, said there had been a large numbers of fans from South Korea this year.

“This is the best volunteer job I’ve ever done. I meet the most interesting people from Singapore to Seattle,” she said.

“There was a man here from Russia who read the book five times, a group from China who love Joyce - the people we meet are fascinating.”

Events are continuing late into the night.

The James Joyce Centre is holding a Ulysses exhibition and showing a display of images by photojournalist Lee Miller.

At Meeting House Square in Temple bar, author Peter Sheridan is hosing a afternoon of readings and songs from Ulysses until 6pm.

A night of cinema and interactive entertainment with James Joyce meets Rocky Horror at the Sugar Club starts at 7pm.

Bloomsday Festival wrap party will take place at the same venue at 10.30pm.