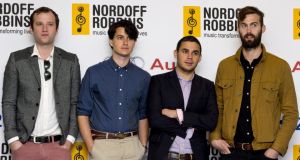 Irish summer festivals are invariably cursed with bad weather but the latest addition to a crowded calendar has arrived in the middle of a sustained heatwave.

Free sun cream, water stations, lifeguards on the stream and warnings not to throw away cigarette butts on the tinder-dry woodland areas of Marlay Park in South County Dublin will make a novel contrast to the usual warnings of mud and rain.

Longtitude is MCD’s first urban festival and is the first to be organised by Zac Desmond, the son of MCD founder Denis Desmond.

It features Phoenix who headline the festival today(Friday), Vampire Weekend and Kraftwerk as headliners and each day will have a capacity of 10,000.

Marlay Park has been used as a venue for big acts for many years, but this is the first time that it will host a festival.

The organisers are using the park’s sylvan setting in the shadow of the Dublin mountains to erect five stages, three of whom will be located in the woodlands around the park for the smaller acts.

For the first time children will be welcome at a MCD festival and there will be a children’s area. Those under four will gain admission for nothing.

The highlight of the weekend is expected to be Kraftwerk’s 3D concert on Sunday evening. Fans will be given 3D glasses on arrival and no other act will be playing at the same time.

Shuttle buses for the venue are leaving on the hour from 1pm tomorrow from Custom House Quay and will return from 10am onwards.