Students host fundraiser at the Academy for Berkeley survivors

More than 1,000 people are expected to attend an event hosted by Nicky Byrne for injured and their families. 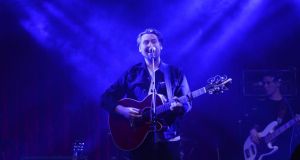 Kurtis Wade performing at a fundraising concert in aid of the Berkeley balcony collapse families at the Academy in Dublin. Photograph: Alan Betson/The Irish Times 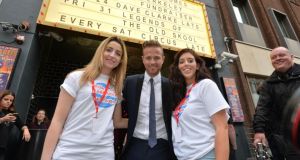 Nicky Byrne with Kate Tunney and Chloe Smith, close friends of those killed and injured in the Berkeley tragedy, at a fundraising concert in aid of the families at the Academy. Photograph: Alan Betson/The Irish Times

A fundraising event for survivors of the Berkeley balcony collapse and their families drew a large crowd to the Academy on Abbey Street in Dublin on Thursday evening.

Hundreds of tickets were sold for the event and organisers said they expected to sell out, and fill the capacity of the venue.

One of survivor Clodagh Cogley’s closest friends Kate Tunney said that the group of students who organised the fundraiser felt “helpless” when they heard about the accident.

“It hits home so much but we just wanted to turn our energy into something positive”.

Westlife’s Nicky Byrne was the presenter for the evening with more than a dozen acts, including Mundy, Jape, Daft Funk and Kurtis Wade, taking part. Tickets cost €25. A crowd-funding page set up by the organisers has raised over €7,000 in the past three weeks.

“It’s a bit surreal having someone tell you that people you’ve known for such a long time have lost their lives so tragically and so far away from home”.

“They’re so far away from us so we wanted to let them know we’re all thinking of them, and we’re all supporting them,” she said.

Organiser Ciaran McCann said that the accident shouldn’t be forgotten about. “It’s only been a month on and it’s still very fresh, but things like this are cathartic”.

There was a raffle on the night, with prizes including an iPad Air, four tickets to Electric Picnic, a meal at two-Michelin star restaurant Patrick Guilbaud in Dublin, and signed gloves from boxer Bernard Dunne.

Five Irish students and one Irish-American were killed last month when the balcony they were standing on collapsed at a 21st birthday party in Berkeley, California. Seven other Irish students were injured, some seriously.

Organisers of the fundraiser said many of the survivors would need significant aftercare, physiotherapy and alterations to their homes when they are able to return home.

“The families have a lot of medical expenses, so we thought they’d need all the help they can get,” DIT student Conall Carroll said at the fundraiser.

Guest Michelle Rooney said that although she wasn’t connected directly to the accident, she felt the need to support it.

“I’m a bit older than the people who were affected by the tragedy but I think everyone who went through the J1 experience is affected in some way”.

Facepainter Aisling Kelly said she believes the most important reason for the event is to give the injured students hope.

“ It’s just such a sad accident that touched so many of us and I think it’s the least the Irish youth can do to help our fellow students when they need it most,” she said.

A tag rugby tournament will take place in Donnybrook on Saturday to raise funds for Ms Beary’s family.

Tickets for players and spectators are €25 and €10 respectively, and the only Irish captains to beat New Zealand, Donal Canniffe (Munster 1978) and Fiona Coghlan (Ireland Women 2014), will take part.