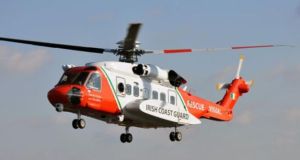 A search has resumed this morning for a fisherman who fell into the sea off the coast of Clare yesterday evening.

The 42-year-old Latvian, who was living in Lanesboro, Co Longford, was fishing in an area known as the Fisherman’s Climb at Ailladee between Doolin and Fanore when he was swept out to sea by a strong wave at 5.30pm.

Attempts by two people who were with him at the time to rescue him proved unsuccessful.

The man went to get a bucket of water to wash the fish he had caught when a wave carried him out to sea.

Witnesses say that he remained bouyant in the water for 15 minutes before sinking beneath the waves in a gale. He was wearing yellow oilskins at the time.

The Doolin unit of the Irish Coast Guard is currently undertaking a cliff-top search of the area.

The Irish Coast Guard helicopter will do a sweep of the area later today. Naval divers are also on the way from Haulbowline to search the area.