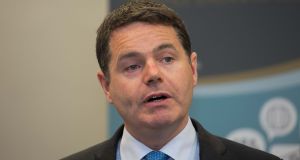 Minister for Public Expenditure Paschal Donohoe: “As a country we are still borrowing for day-to-day spending and, if we have learned anything from the [economic] crisis, the excesses of a pro-cyclical fiscal policy must be avoided.” File photograph: Gareth Chaney Collins

Now is not the time to jeopardise the country’s economic progress by prematurely repealing financial emergency legislation, the Minister for Public Expenditure Paschal Donohoe has said.

In a letter to public service trade unions on Thursday he said immediately scrapping the legislation, which underpinned the various cuts to terms and conditions for staff across the public service over recent years, would be “unaffordable”.

Mr Donohoe said he had to balance calls for increased staffing levels in the public service, greater investment in capital infrastructure and other Government programmes with demands for the unwinding of the financial legislation, which is known as Fempi.

“As a country we are still borrowing for day-to-day spending and, if we have learned anything from the [economic] crisis, the excesses of a pro-cyclical fiscal policy must be avoided.”

“Increased Government expenditure has to be sustainable and based on sound foundations.”

Last month the public services committee of the Irish Congress of Trade Unions wrote to the Minister calling on the Government to repeal immediately the Fempi legislation.

The unions argued that this legislation infringed on the basic rights of State employees.

However, the unions also warned that abolition of the Fempi legislation would not resolve all the issues between public servants and the Government.

The unions warned repeal would need to be followed up with talks about low pay, additional working hours for staff and other disimprovements in terms and conditions that were introduced in recent years.

Mr Donohoe in his replying letter said: “I fully appreciate the position of Irish Congress of Trade Union members and the pay reductions they have suffered but now is not the time to jeopardise our economic progress with the premature and unaffordable immediate repeal of the Fempi legislation. The Government remains committed to the implementation of the Lansdowne Road (pay) agreement as it affects your members.”

The Minister said the Fempi legislation was still needed given the instability in the international economy, the fragile nature of the Irish economy, the requirement to protect competitiveness gains, the continued financial deficit and high levels of debt as well as the obligation to comply with the EU Stability and Growth pact.

He said the Lansdowne Road deal provided for a sustainable and agreed basis for the phased unwinding of the financial emergency legislation.

“I note the Irish Congress of Trade Unions’policy position on the prioritisation of investment in public service infrastructure articulated in the ‘Congress Platform for a Fair Society’ and associated calls for increased staffing in frontline public services, for example in the health sector.”

“In this we are in complete agreement. That is why this Government has committed to favouring increased expenditure over tax cuts by a ratio of two to one. That is why we have recruited over 18,000 additional public servants since the beginning of 2014,to fill critical gaps and provide for demographic change.”