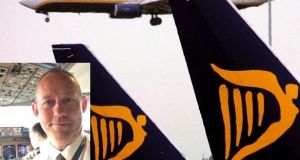 (Inset) Ryanair pilot Mark Christensen. Counsel for Ryanair told the tribunal the bags represented a routine delivery of cash from the carrier’s bases across its network. Photograph: EPA

A Ryanair pilot who refused to carry bags of company cash on a flight from Manchester to Dublin has told the Employment Appeals Tribunal no documentation or security clearance had been provided when the money was brought aboard by ground crew in September 2014.

Mark Christensen who is seeking compensation for constructive dismissal told the tribunal it would have been against aviation regulations to carry bags without documentation, even when the bags had been brought aboard by Ryanair ground crew.

Mr Christensen told the tribunal he had been running through pre-flight checks in the cockpit at Manchester when a woman ground crew member placed a large bag on the cockpit floor behind him.

He said he asked if there was any documentation with the bag and the crew member had opened it revealing a number of smaller, sealed bags, before remarking, “no there is no paperwork”.

He said she said to him, “these are the bags to go to Dublin”; to which he replied, “if there is no paperwork can I see inside the smaller sealed bags”? But the ground crew member said this was not possible.

Mr Christensen said he overruled a suggestion from the first officer that the bags be taken in the hold of the plane. He said if a Civil Aviation Authority inspection had taken place his pilot’s licence would have been “on the line”.

Mr Christensen said he was subsequently faced with a disciplinary inquiry by Ryanair and was demoted to the position of first officer. The tribunal was told the demotion was initially to be for one year, but was later reduced to a period of six months.

He resigned on October 30th and subsequently took a case for unfair dismissal against the company. He is now employed with an airline in China in an advantageous position, the tribunal was told.

However counsel for Ryanair Ross Aylward told the tribunal the bags represented a routine delivery of cash from Ryanair bases across its network.

The money was from Ryanair cabin and ground sales and would be collected at airports from any one of its 69 bases across the network, and delivered to either of two counting houses, one in Dublin and one in Stansted.

Mr Aylward said carrying the money to Dublin or Stansted was standard company practice, the bags did carry documentation he said, and he told the tribunal Mr Christensen had carried such bags in the past and knew what was in them.

Mr Aylward said what had happened in the transfer of the cash was something which “happened 69 times a day” every day. And in refusing to carry the bags Mr Christensen was breaching established company practice with which he was familiar. He said Ryanair did not accept there was no documentation accompanying the cash on the occasion. “There were documents in the bag,” he said.

In addition Mr Aylward said Mr Christensen had “ failed as a captain to come up with a solution in 20 minutes” that the plane was waiting to leave. He said the company’s internal disciplinary process had been activated, there had been two hearings and Mr Christensen had also been given the opportunity of withdrawing his resignation.

The company also disputed Mr Christensen’s salary level at the time of departure. Mr Aylward said Mr Christensen had filed a claim based on a captain’s salary of about €11,500 per month but the monthly gross for a captain was €10, 147.

Mr Aylward said it “may” also be the company’s position that as Mr Christensen subsequently moved to a more advantageous position, there was no consequent loss to the man in terms of income.