RTÉ payout ‘damaging in the extreme’

Public broadcaster condemned at rally for paying €80,000 over homophobia allegation 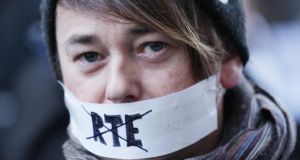 RTÉ’s decision to apologise and pay damages over allegations of homophobia amount to a threat to free speech, a rally heard this afternoon.

A crowd of approximately 750 people attended a rally hosted by LGBT Noise to protest at a decision by RTÉ to remove parts of an interview broadcast on a recent Saturday Night Show by Rory O’Neill, otherwise known as Pantibliss, and to issue an apology and damages reported at more than €80,000 as a result.

Caroline Early from LGBT Noise drew strong applause when she condemned “the silencing of Rory O’Neill’s comments” and described the apology issued to John Waters, Breda O’Brien, and four members of the Iona Institute as “misplaced”. All have denied being homophobic.

“These actions by RTÉ explicitly contravene their role as a public broadcasters. It is not only irresponsible, but it is damaging in the extreme,” she said. “LGBT Noise defends the principle of free speech.”

Senator David Norris said he wanted to know from RTÉ what they were doing when they agreed to the payment.

“If they are going to do that, I want to know why. It’s not their money. It our licence fee. It is unprecedented the speed at which they did it.”

He believed it was time that a “searchlight was turned on the Iona Institute”.

Labour Senator Ivana Bacik said she echoed the comments made by the Minister for Communications Pat Rabbitte that the payout may have a “chilling” effect on the debate.

“It is important that we engage in this debate in a fair and reasoned manner, that we don’t engage in a way that censors debate.”

Senator Averil Power, a strong advocate for gay marriage, said it was “astonishing” if RTÉ had agreed to pay out €80,000 in damages.

She said the Iona Institute frequently engaged in arguments that were controversial and complained of not being allowed free speech.

“To then seek to completely censor somebody else’s viewpoint by resorting to solicitors’ letters is ridiculous. Thankfully, we live in a free society and we have free speech. People are entitled to express their opinions.”

She said those who felt they were libelled ought to have taken up the right of reply they had been offered and responded to the comments.

RTÉ did not comment on the payout today. However in a statement, the broadcaster said it was “commited to debate that is fair, impartial and accurate. The debate related to this subject featuring a diverse range of views broadcast on RTÉ One last night is indicative of exactly that.”

“ The key issue here is that RTÉ walked itself into a defamation case and then offered a completely inadequate response which is a right of reply,” she said.

“It is not up to you to defend yourself. It was never about money. It was about putting down a marker that there is a difference between robust debate and defamation and that we can have a robust and fair debate only if people are certain that they are not being defamed.”