Rose of Tralee 2015 makes it a first for Royal County 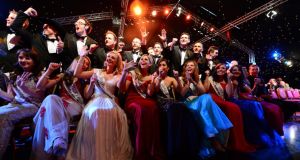 Roses arrive into the Dome in Tralee as Dathi Takes to the stage. Photograph: Domnick Walsh / Eye Focus LTD

Meath Rose and cancer survivor Elysha Brennan was last night crowned Rose of Tralee winner 2015. “Thank you so much from the bottom of my heart,” was her response to being named Rose 2015.

The 22-year-old from Bettystown, Co Meath, told host Dáithí Ó Sé that she is a student at the Royal College of Surgeons, Dublin, but has considered alternative career options such as “joining the circus”.

Ms Brennan also said she has been involved with musical theatre from an early age, and had “a passion for all things song and dance”.

“I have been lucky enough to have taken part in the Olympia Theatre Dublin Christmas pantomimes and a Michael Jackson tribute show,” she said.

“I made a bucket list two years ago and am slowly ticking things off, including visiting the Statue of Liberty in New York and Greek island hopping.”

Last night’s win comes after some difficult times for Ms Brennan who was diagnosed with Hodgkin’s Lymphoma during her repeat Leaving Certificate year when she was 19.

“I was given the news that I was in complete remission in February of 2013,” she said. “Two and a half years later, I’m happy and healthy and in a course that I love.”

Love it or loathe it, the festival itself continues to be an enduring ratings winner for RTÉ.

Almost 500,000 viewers tuned into the first night of the festival, which mixed deep seriousness and high farce in equal measure.

The 493,900 who watched the first night was up 7,000 on last year. Moreover, social media has once again boosted the profile of the festival, giving the public a chance to vent their views for good or ill.

The hashtag #roseoftralee was trending in Ireland, which one would expect, but also worldwide on Monday night. For some unfathomable reason, the hills were alive with Austrians following the festival.

One would imagine they would never have heard of or taken any interest in the Rose of Tralee. The Rose of Tralee was trending on Twitter in Austria on Monday and Tuesday. It might be time for an Austrian Rose next year.

Ms Hillary, who is a medical doctor, one of two in the competition, took off her sash and rushed to the woman’s aid.

“That’s the calibre of women this festival attracts and should do in the future,” Colgan said.

On the second night in the Dome, she wore a dress made by Kerry-born fashion designer Don O’Neill, who has dressed Oprah Winfrey, among others. He gave her eight dresses in total.

The FA Cup made an appearance in the Dome last night, much to the surprise of the German Rose, Róisín Ní Mhathúna.

The trilingual kindergarten teacher (22), who is based in Berlin, was born in Birmingham. She and her father are huge fans of Aston Villa and have been to 200 games around the world. Ní Mhathúna got to hold the famous trophy, which is more than can be said for the Villa team.