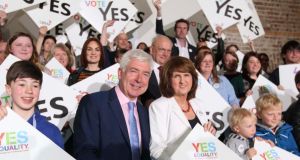 Tánaiste Joan Burton said it was “right and appropriate” that public sector workers enter talks with the Government on restoring pay levels.

She said the Government wanted to ensure public servants, in an appropriate way, were able to share in the economic recovery.

Ms Burton declined to comment on reports in the Sunday Independent yesterday that increases of between 2 per cent and 3 per cent were on the cards for nearly 300,000 staff across the public service on foot of the forthcoming talks.

Talks between the Government and trade unions on pay restoration for public-service workers are expected to get underway in mid-May.

Increases of 2-3 per cent would be in keeping with those that have been negotiated by trade unions in the private sector over the past year or so.

Last week a pay forum recommended a 2 per cent rise for staff in the State-owned ESB.

He also indicated reversal of pay cuts imposed following the crash would be staggered over a number of years.

A number of trade unions have urged the Government to increase earnings for staff by abolishing or reducing the rate of the public-service pension levy. The measure reduced earnings by about 7.5 per cent on average.

Some union leaders have also proposed the Government should opt for a flat rate award – which would provide greater benefit to low earners than a percentage increase.

However a major issue in the forthcoming talks is likely to be whether any conditions are proposed by the Government in return for pay restoration.

A number of Fine Gael ministers have publicly called for any pay restoration to be linked to additional productivity.

This idea has been rejected by senior trade union leaders.

Mr Howlin said last week that pay restoration would involve continued staff co-operation with reforms that were “hard-wired” into the Croke Park and Haddington Road agreements.

A senior Government source at the weekend said there was a determination that the recovery must be sustainable and all policies – including public-sector pay – would be have to meet that requirement.

It was also claimed any pay increases would not come into effect until next January.

Speaking yesterday Ms Burton said: “There is a need to renegotiate in relation to the next phase of our life and our economy in Ireland, in terms of the recovery. Minister Brendan Howlin will be talking about this at some length next week.

“We will be moving to convene discussions with the unions involved, I hope some time around the middle of May. I am not in a position to say what amounts might be involved.

“We want to ensure that public servants, in an appropriate way, will be able to share in the recovery.”