A virtually reconstructed archive at Dublin’s Four Courts has been unveiled, granting the public access to thousands of pages of historical documents destroyed during the Civil War. Video: Government of Ireland 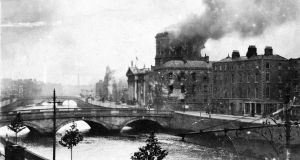 A photograph of the Four Courts ablaze. It was taken by Joe Rodgers, who was aged 17 and lived on Essex Quay.

The first look at a virtually reconstructed archive at Dublin’s Four Courts building will be unveiled this week, showing how the public will be able to access thousands of pages of historical documents destroyed during the Civil War.

Despite the complications of Covid-19, the Beyond 2022: Ireland’s Virtual Record Treasury project is well on course to hit its centenary deadline and may even be able to make more material available by then than originally thought.

During the 1922 Civil War, the Public Records Office attached to the court buildings was destroyed in a fire started by an explosion.

It wiped out vast amounts of important records detailing various aspects of Irish life under colonial rule – from 19th century census documents, chancery records stretching back to the 14th century and land grants by the crown among countless others.

Last December the government dedicated a further €2.5 million to their revival with at least 10 full-time researchers attempting to painstakingly reconstruct the archive from alternative sources around the world.

One aspect of the project is the creation of a virtual tour of the former reading room, which survived the fire, and access to archive contents. A three-minute sample of what that will look like, as well as a selection of some of the material, will be unveiled on Tuesday.

“In terms of what we have committed to do by the [2022] centenary, I thing we are very far along,” said Trinity College historian and project director Dr Peter Crooks, who hopes the digital touring will be up and running by September.

“We have lots more to do in the next year but we are definitely on track. I think we might exceed our targets in terms of what we can make available.”

For researchers, the availability of material dating back to the 12th century will be invaluable. With the help of sophisticated machine reading technology, the project aims to offer 50 million words of searchable material by 2022. Thousands of papers have already been digitised, making the continuation of work possible during the coronavirus pandemic lockdown.

In June 1922, following a period of intense fighting at the Four Courts, a massive explosion was detonated destroying much of the building including its records office.

Historians disagree over exactly how it occurred, but Dr Crooks points out that “there is a difference between a total lack of care, or being ignorant, and deliberately detonating a bomb to destroy the records”.

Tuesday’s brief glimpse of some of the reclaimed material will include a book donated digitally by Harvard University from the Library of Dublin Castle, which details much of what was originally at the Four Courts facility.

“It’s like a treasure map almost. [It] gives you a hint that something existed in the 18th century and we can go hunt for it,” Dr Crooks said.

The project team will also release six rare copies of Iris Oifigiúil (formerly the Dublin Gazette), an administrative magazine detailing events in Ireland from as early as 1690.

There will be copies of other old documents destroyed in the fire that give insights into historic life. One drawing depicts a 14th century “Irishman” with a bell on his hat, brandishing an axe.

“The stereotype is that an Irishman always carries an axe...it’s a weapon used by treacherous people. If you hold an axe, you don’t have to unsheathe it,” Dr Crooks said. “It was always considered the weapon of the lower class...they are making a mockery of this Irishman.”

On Tuesday, the 98th anniversary of the fire, a series of online talks will be held giving insights into the technological and historical progress of the project.