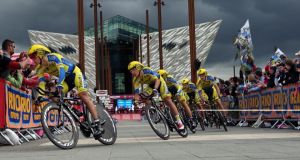 Surveillance drones have been deployed more than 100 times by police in Northern Ireland since they were first acquired in the run-up to the G8 summit in Co Fermanagh in 2013.

Some can intercept communications and access electronic data protected by encryption or passwords.

Responding to Freedom of Information requests submitted by The Detail investigative website in Belfast, the Police Service of Northern Ireland (PSNI) provided new data on where and when drones have been used. However, they refused to release any information on how, or if, drones are used in covert surveillance operations, citing security concerns.

l Drones have been deployed 114 times across Northern Ireland since June 2013;

l The PSNI currently has nine drones consisting of three models, including one craft with a wingspan of almost 10ft. Twelve officers are trained in their use;

l The cost of the project to date has been £1.5 million.

The technology was bought as part of preparations for the G8 summit at the Lough Erne Resort near Enniskillen, Co Fermanagh.

A major security operation was mounted but protests did not materialise on the scale seen at previous summits.

The Northern Ireland Policing Board is due to make a decision on whether the PSNI should have to make a report to the board every time a drone is deployed.

University of Sheffield Professor Noel Sharkey, an expert in robotics and artificial intelligence, said while he welcomed the PSNI’s willingness to release some information, he was concerned about the lack of detail on any use of drones in covert policing operations.

“Information on covert deployment should also be transparent. There are always issues between transparency and security but there needs to be clear accountability,” he said.

The PSNI said the primary use of its drones was to provide “overt support” to district policing. “Confirming or denying the specific circumstances in which the police service may or may not deploy UAVs covertly would lead to an increase of harm to covert investigations and compromise law enforcement.”

Prof Sharkey said he recognised drone surveillance could assist police in tackling terrorist activity or serious crime. But he warned misuse of the technology could affect people’s human rights and underlined the need for accountability.