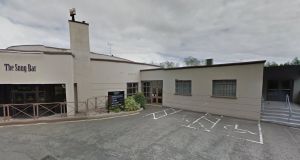 The Waterfoot Hotel in Derry has cancelled a PSNI event after threats by a dissident Republican group to hold a protest. Photograph: Google Maps

A Police Service of Northern Ireland (PSNI) recruitment fair due to take place in Derry this weekend has been cancelled, following a threat by a dissident Republican group to hold a protest.

The decision to cancel the Waterfoot Hotel event was taken by the owner, Garvan O’Doherty, who told the Derry Journal on Tuesday he was taking the decision to put his staff and customers first.

Nearly 3,000 people have so far applied to join the PSNI.

“Clearly there are people out there in today’s society who are still intent on targeting our police service and causing harm to our communities,” said PSNI assistant chief constable Mark Hamilton

“We know, however, that the actions of these few misguided individuals will not stop people pursuing a career in policing,” he said. “We are currently seeking an alternative venue for this event.”

The Waterfoot was evacuated last Friday when police received reports that a suspicious device had been planted in the hotel grounds. Later, explosive experts declared that it had “a viable device”.