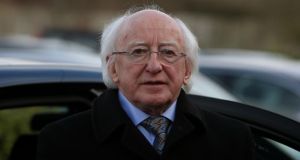 Speaking at a visit to Microsoft, in Redmond, Seattle, President Michael D Higgins emphasised the importance of the company to contemporary Ireland. Photograph: PA

In a high school more than 7,000km from Ireland, students with and without Irish connections are learning to play GAA games, President Michael D Higgins discovered on Thursday.

The President and Sabina Higgins visited Skyline High School in Seattle as part of an eight-day official visit to the US west coast. The school is one of seven high schools in the area where GAA sports are taught as part of the PE curriculum.

Terry Lynch, coach education chair for North American GAA and youth co-ordinator with local team the Seattle Gaels, said Skyline has had GAA as part of the curriculum for five years.

“It’s a fantastic way of getting the sport known in the US,” he said.

Mr Lynch was trained at Croke Park, Dublin, to educate coaches in America and realised PE teachers could be coaches.

American students pick up the game very quickly, he said, and it’s played co-ed; the rules are slightly modified and some high schools play ladies’ rules regardless of gender.

The most important thing is we are now self-sustaining,” Mr Lynch said.

Ian Johnson, a member of the youth development programme, was introduced to Gaelic football by his boss when he worked as a bartender in an Irish pub. He now plays for the Seattle Gaels, and prefers hurling.

He said Irish-born players make up 15 to 20 per cent of the team, the rest are “Yankee players” and the schools programme is helping to sustain that.

A student at the school, 17-year-old Alec Willig, said he began playing three years ago and really enjoys it, describing it as a mixture of football, soccer and basketball.

“It’s like combining the sports you already know,” he said.

Seattle is to host the North American GAA Championships for the first time next year. Some 100 teams from the US, Canada and the Caribbean will travel to compete.

The President, who attended a sports demonstration at the school, praised its sporting facilities, particularly the football stadium. He said it was wonderful to see that Gaelic games had a role in the school’s education.

“It is wonderful to know this game is being played so well and so enthusiastically,” he said.

“The Gaelic Athletic Association, the GAA, plays a pivotal role in Irish life at home and abroad, and I want to commend our games to you not just as a means of physical exertion, but also for their values: to play Gaelic Games means also to embrace fairness, inclusiveness, and community,” he said.

Speaking later at a visit to Microsoft, in Redmond, Seattle, the President emphasised the importance of the company to contemporary Ireland. Microsoft, which employs 1,200 in Dublin, recently announced the development of a new €134m campus in Leopardstown.

Mr Higgins also highlighted the many Irish people working in other Microsoft facilities, including in Seattle. He said the company’s powerful role in the world and in day-to-day lives brings great responsibility.

“We look for companies like Microsoft to push the boundaries of science through innovation in technology and the creation of a safer, more equal planet, but also in helping to ensure that the benefits of that innovation are available to those who most need it,” he said.

He praised the company’s citizenship programmes including the provision of free software to non-profit organisations in Ireland and free technology training. He highlighted the “scourge” of youth unemployment and said he was very impressed with Microsoft’s Irish initiative to help people from disadvantaged backgrounds and individuals who have been long-term unemployed to acquire IT skills, enabling them to secure work in the IT industry.

“In the comings and goings of that migration, my hope is that opportunities for innovation and expansion will increase and multiply in the country of which I have the honour to be President,” he said.