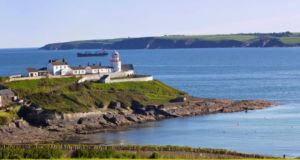 The Port of Cork has welcomed the decision of An Bord Pleanála to grant planning permission for the €100 million Ringaskiddy Port Redevelopment.

The Port of Cork had unveiled plans for the project in April 2014 and last September An Bord Pleanála held an oral hearing into the proposal lasting several days.

A decision had been expected late last year but it was delayed.

According to Port of Cork CEO, Brendan Keating, the granting of the application made under the Strategic Infrastructure Act will have huge significance for the port’s activities.

The decision will allow Port of Cork transfer its container terminal from Tivoli down the harbour to Ringaskiddy where it can accommodate large container vessels.

The trend towards larger container vessels was affecting Cork’s ability to grow container traffic as the larger vessels could not turn at Tivoli because of the narrowness of the channel.

Mr Keating said while the decision and the conditions it entailed need to be considered in more detail, the port is very pleased with the go-ahead.

He said it was vital for the port to be able to accommodate larger vessels if it is to meet both the needs of its customers and the economic developmental needs of the region.

“Today’s decision will enable us to do this and in turn, future-proof Cork as an international gateway for trade,” said Mr Keating in a statement issued by the Port of Cork.

“Some 98 per cent of goods imported or exported from Ireland are moved by ship, amounting to over €14 billion annually in Cork alone, highlighting the importance of ports to our economy.

The development is the first phase of the implementation of the Port of Cork’s 2010 Strategic Development Plan Review which highlighted Cork as a Tier 1 port of national significance.

Mr Keating said it’s expected to have Phase 1 of the Ringaskiddy Port Redevelopment project, which includes a 200 metre long berth and new container yard operational, by 2018.

“The overall project will facilitate, on a phased basis, the Port of Cork in transferring cargo handling activities from Tivoli and the City Quays in due course,” he said.

The proposal is a scaled back version of an earlier plan which was refused planning permission in 2008.

The new proposal saw a change to the original plan which had proposed the reclamation of the Oysterbank off Ringaskiddy which led to strong objections from locals.

1 Coronavirus: More ‘striking’ evidence BCG vaccine might protect against Covid-19
2 Coronavirus: 25 more people die in the Republic; New Garda powers come into force
3 Coronavirus Q&A: What new powers have the gardaí been given?
4 This time, the future of the euro really is at stake
5 Micheál Martin raises need for ‘end point’ of coronavirus restrictions
Real news has value SUBSCRIBE