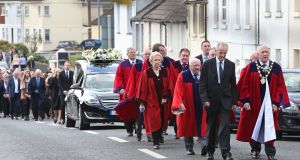 Galway City Councillors form a guard of honour as the remains of Bobby Molloy are taken to the New Cemetery in Galway. Photograph: Joe O’Shaughnessy.

Former Cabinet minister Bobby Molloy was a politician imbued with “personal warmth, intelligence” and “humility” during his “long -filled life”, mourners at his funeral in Galway Cathedral heard.

The Galway West TD, who left Fianna Fáíl to help found the Progressive Democrats, was first and foremost a family man who was a “great listener” and who was “kind, straightforward, always calm and caring”, his daughter Sinéad said.

In a tribute before a congregation of several thousand, including many political colleagues, his daughter recalled her father’s prowess in a number of sports, ranging from high jump and pole vault to swimming,sailing, football, rugby and rowing.

One of his proudest moments had been when he had received a letter addressed to him simply as “Robert Molloy, Athlete, Galway”, she recalled.

Rowing had been his “enduring passion”, and in later years he could recall “every bend on the River Corrib”, and every race he had competed, she said.

He had begun coxing with his school Coláiste Iognáid, the “Jes”, and had secured many victories with his crews. She recalled one particular race on the Liffey in Dublin where his instruction to his crew to take “one long power stroke” under a bridge with a narrow arch paid off against a close competitor.

Ms Molloy recalled how her father loved life at University College, Galway, as it was known then, where he was active in student politics. 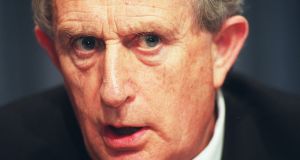 Bobby Molloy: A life in politics

He also loved Connemara and the islands off the west coast where he took his family on holidays and was a keen gaeilgeoir. However, the true love he held for his wife, Phyllis, who he became engaged to just 10 days after they met at a byelection in Cork in 1972, had “endured for 44 years”, she said.

Ms Molloy paid tribute to the Western Alzheimer’s group, known as “the club”, which had supported her father in his illness, along with the Galway Hospice and the Health Service Executive.

Salthill parish priest Fr Gerry Jennings, who was chief celebrant at the requiem Mass, had also provided key support, she said, along with many friends.

Fr Jennings said Mr Molloy was known for his “personal warmth, humility, intelligence and courtesy”, and had played a significant role in Irish political life, holding a number of Cabinet posts during his 37-year-long career. He had also left his mark on Galway, where he was mayor from July, 1968, to June, 1969.

His daughter Sorcha recalled her father’s love of sailing, in a closing poem, The Ship by Charles Henry Brent, while the role of those involved in water safety and in peacekeeping abroad was remembered in prayers by family members. Mr Molloy was instrumental in founding Irish Water Safety in Galway.

A guard of honour holding the blades from three rowing clubs - the “Jes”, NUI Galway and Galway Rowing Club - marked the departure of the funeral cortege from the cathedral entrance. Mayor of Galway Cllr Noel Larkin and fellow councillors in robes walked in bright sunshine behind the hearse up to Mr Molloy’s burial place at the New Cemetery at Bohermore.

President Michael D Higgins was represented by his aide-de-camp Col Michael Kiernan, while the Taoiseach was represented by Lieut-Col Kieran Carey. Sabina Higgins, who also visited the Molloy family home on Tuesday, attended the service.