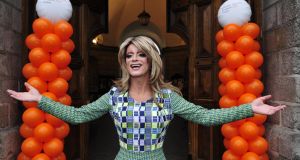 Panti Bliss has come in 29th place in the Time 100 readers poll of the world’s most influential people. Photograph: Aidan Crawley/The Irish Times

Panti Bliss has come in 29th place in the Time 100 readers’ poll of the world’s most influential people.

The poll asked online readers to cast their vote and the final list will be decided upon by the Time magazine editors.

The final list, which will be published on April 21st, will comprise of “world leaders, great minds in science and technology, outstanding figures in the arts and other icons of the moment”.

Democratic presidential candidate Bernie Sanders won the top spot with 3.3 per cent of the vote, while Panti Bliss achieved one per cent.

In a statement on her Facebook page, Panti wrote:

“So voting is closed on the TIME 100 poll, and bizarrely I came in at #29 (suck it, Vladimir Putin! ). That doesn’t mean I’ll actually be on their list though because that’s decided by the magazine’s editorial board, not the public, but I feel like it might at least get me an invite to the party, right?

“If it does, I’ll need a date. I’ll be taking applications. Unless Zayn decides to come with me... in which case, applications closed.”