Galway homeowners have spent years living under the threat of CPOs

‘If they can get horses and bats replacement homes why can’t they deal with humans?’ 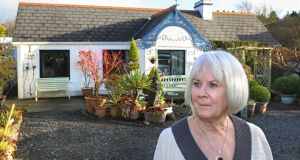 Deirdre Goggin at Ballindooley beside the Headford Road. She says the compulsory purchase of her home may ruin her financially. Photograph: Joe O’Shaughnessy.

Deirdre Goggin’s cottage on the Headfort Road in Galway is picture perfect even on a rainy day. Decades of work have gone into sculpting mature trees along the gravel driveway. Inside a pitched pine ceiling reflects light into the oldest parts of the cottage. A book-lined study leads to a kitchen and a conservatory overlooking a rock garden with mature trees.

It is not hard to see why she would oppose plans for Galway City Ring Road which is set to obliterate the house along with 21 neighbouring homes in the Ballindooly/Castlegar area.

Yet Goggin acknowledges that as much as she and her husband love the home where they have lived since 1995, the dual-carriageway “is probably going to happen”.

She is not “anti-roads”, and despite her Ballindooly Castlegar/School Road neighbourhood – part of the city Gaeltacht – being “ decimated”, she accepts the “greater good” trumps individual households.

But she says the compulsory purchase of their homes by the local authority may ruin her financially – as well as many of the other 53 homeowners affected. While the compulsory purchase order (CPO) has not yet been confirmed, she says she and her neighbours have been in effective “lockdown” since their homes were identified as being on one of a number of potential route options in 2015.

As candidate properties for a CPO the properties can still legally be sold, but in effect they would be virtually impossible to sell given the complexity of the CPO legislation and likelihood of a buyer not wanting to involve themselves in the process.

Goggin says the council paid for the services of a valuer some years ago, but the indicative valuations were not enough for any of them to buy a similar house elsewhere in the area, or to buy land and build anywhere nearby.

“For my own part it is waking up at 3am, you are so tired you can’t open your eyes, and your brain starts up going in circles, then your stomach starts churning,” she says.

Goggin contrasts the unfortunate vista with proposals to ensure Ballybrit racecourse is provided with “stables and facilities which are of an equal or higher standard to the existing buildings”, she said.

Neighbours Pamela Needham and Tom Rea said NUIG would be affected, but would be well treated with a new flood-lit sports pitch and work on its sports pavilion .

“And the bats ...Every household was surveyed for their existence,” says Goggin. “One set of mammals gets looked after and rehoused in specially designed roosts if necessary, culverts are installed for other mammals – the human mammal doesn’t count” .

Mother-of -four Sharon Morris says “the CPO process is not fit for purpose”.

“If they can get horses and bats replacement homes why can’t they deal with humans?”

Sharon and her husband have been trying to expand the home they share with their growing children, but they are now in the sixth year unable to apply for planning permission.

“We need a bigger house. We can’t sell; if we rent our house out and rent a bigger one somewhere else we get a massive tax bill. now we are facing a massive loss. It is not about the road – it is about the process.”

On School Road, Marie O’Donovan and her husband Denis stand to lose their home. Denis planned to retire and spend his time building a polytunnel– there was mention of a patio, home refurbishment. That has all been on hold since the process started.

In 2013, the European Court of Justice overturned plans for a Galway Outer Orbital Road in a case taken by environmental campaigner Peter Sweetman. Mr Sweetman has since signalled his intention to object to the current road scheme. While the locals are glad of his input, the danger is being “in lockdown”, as they put it, for another 16 years.