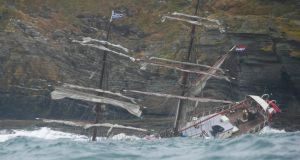 The owner of the tall ship Astrid, which sank off the west Cork coast last month, yesterday expressed his delight at the news that a number of items from the vessel which had been feared stolen had been recovered.

Dutch skipper and owner Pieter De Kam said he had learned on Saturday morning that the ship’s bell, compass, wheel and binnacle had all been recovered by divers carrying out a survey of the wreck in preparation for a salvage operation later this month.

“Yes, I have heard that they have all been recovered. I don’t know where exactly they were found but they were found by the company that is salvaging the ship – they found my compass, my wheel and my bell so I am happy,” he said.

Late last month, it emerged that the bell, compass and binnacle had disappeared from the deck of the 95-year-old brig which sank near Kinsale on July 24th, and it was feared they had been stolen by thieves who got on board the wreck.