My parents do not know the half of what I got up to in college, and that is how it should be 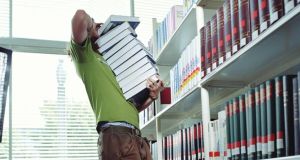 “There is far too much reliance on notes made available to download, which undermines independent research.” Photograph: Getty Images

I am sure my parents did not look forward to parent-teacher meetings when I was at school, as I was far from a model pupil. But whatever about having to endure those tense encounters, at least by the time I was 17, when I started as a student in UCD, they could rest assured there would be no parent-lecturer meetings. What I did or did not do in college was my business and responsibility. If there were financial implications they would rest with me. That is precisely how it should be

One of the first things I tell first-year students at UCD is that they are adults and responsible for their own progress or lack of it. The transition from second to third- level education is far from painless. For some it can be exceptionally difficult, but that is not helped by spoon-feeding, either from lecturers or parents.

In my experience, most parents do not want to hover excessively over their college student offspring. However, it has been noticeable for many years that many are too intrusive.

It starts before students commence undergraduate studies. During college open days, parents are much more present and voluble. A few years ago a mother asked me “How much is an arts degree worth?”

Replying, I stressed the broad, valuable educational foundation it would provide and how it could open the mind and make it independent. But that was not what the parent had meant: “No,” she said, “I mean, what is the starting salary for someone with an arts degree?”

I have also had the experience of unpleasant phone conversations and, occasionally, conversations in person with parents who will simply not accept their son or daughter’s results. Having watched them come out of secondary schools with several A grades, the parent cannot understand how the student is now floundering, sometimes because they have failed to embrace the idea of independent learning and thinking and cannot repeat their strategy for the Leaving Cert where they learned too much by rote or formula or were too often told there is only one answer.

It is lazy and inaccurate to brandish the current generation of students as inferior to previous generations, but I agree entirely with the recent assertion of Dr Greg Foley of DCU that there is far too much reliance on notes made available to download, which undermines independent research and browsing in the old- fashioned sense of hunting for information in the library. This is an issue academics also need to address by resisting the demands that course materials be centralised and digitised.

Of course parents want to protect their children, but it is important to distinguish between those parents who have had to fight for the rights of students with special needs at every level of education and those who just lose sight of the need to back off.

In some cases, parents will contact tutors or lecturers (so much easier now with email) with requests for extensions or pleas of mitigating circumstances. That is beyond embarrassing: if a student cannot manage to navigate such territory themselves, they are failing the basic third-level test of independence, never mind any academic test, and intrusive parents are compounding the problem by not knowing the difference between support and interference.

In my experience, there are also fewer students working than when I was younger. This is not straightforward; the ability to hold down a job depends on the course being pursued and various other factors and financial needs, but it is relevant to independence. Students who are working in part-time jobs can be more focused and better time managers because they have to learn how to strike a balance. I am aware of parents who will not countenance their student children working, the erroneous insistence being that it can only be to the student’s detriment.

My parents do not know the half of what I got up to during my college years, and that is how it should be. Concerns about hyperactive parents stymieing independence are not just born of anecdote or shaky impressions.

There is a reason why social scientists have been looking at the concept of “extended adolescence” in recent years, as pointed out in this newspaper by Sheila Wayman in 2013. Cruel as it sounds, there are parents who just need to engage with a life beyond their children.