Findings emerge from detailed analysis of data from 2008 to 2012 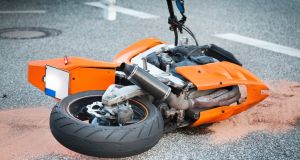 The data showed that motorcycle road fatalities mainly occurred at weekends, in daylight and in dry conditions.

A third of motorcyclists who died in crashes during a five-year period examined by the Road Safety Authority (RSA), drank alcohol before the collision.

And, of these, almost half were four times over the current legal blood/alcohol limit.

The findings have emerged from a detailed RSA analysis of data from 2008 to 2012 assembled by the Garda for forensic collision investigation reports which are compiled after every major road crash.

The analysis found that in 86 per cent of motorcycle fatal crashes, the motorcyclist was culpable, or partly culpable, for what happened.

RSA research and policy analyst Maggie Martin said she was shocked at what she found. Ms Martin spent months pouring over 867 fatal crash reports to try to find out what caused the crashes or contributed to them. During the period examined, 1,077 people died in road crashes.

The crash reports could tell “with a lot of accuracy what happened before a collision”, she said. “How terribly predictable they all seemed. I really found it distressing that these people died for no reason other than bad choices made on the day.”

Of the 867 crashes that Ms Martin examined, 93 (or 11 per cent) involved a motorcyclist and resulted in the deaths of 96 people and the injury of a further seven. Of those, 29 per cent had consumed alcohol before their crash and 71 per cent of those were over the current blood/alcohol limit (almost half were four times over the limit) .

“This really shocked me to the core,” said Ms Martin. “I was absolutely totally surprised that nearly 30 per cent had consumed alcohol.”

The data showed that motorcycle road fatalities mainly occurred at weekends, in daylight (12pm-7pm) and in dry conditions. They happened mainly on rural roads during summer months with the top six counties being Cork, Dublin, Galway, Kerry, Limerick and Tipperary.

In car and other vehicle crashes, there was a concentration in evening and night-time driving.

Almost all (98 per cent) of the motorcyclists concerned were male, with 50 per cent of them being aged 25 to 34, suggesting to Ms Martin that while those riders “have more life experience [than the most vulnerable cohort of young car drivers] but not necessarily motorcycle experience”.

Ms Martin said the dominant factors in motorcycle crashes were speed and rider behaviour – “overtaking at speed, overtaking on corners, creating a third line of traffic [by weaving in and out, often crossing white or double white lines] and hoping [oncoming] other drivers will move over”.

Excessive speed was a factor in almost half of the crashes while 18 per cent of riders were not wearing a crash helmet, which is a legal requirement.

– April and June are the most dangerous months for motorcyclists

– Six counties (Cork, Dublin, Galway, Kerry, Limerick and Tipperary) accounted for just under half of all fatal motorcycle collisions

– 30% had no motorcycle insurance

– Four of the six pillion passengers killed in the crashes examined had consumed alcohol.